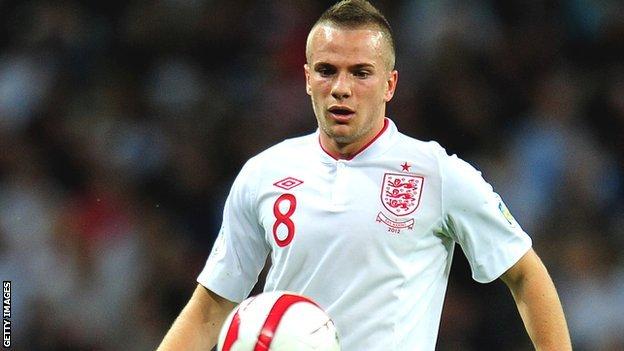 Rooney scored twice in on Friday after being given the armband in the absence of Steven Gerrard and Frank Lampard.

Gerrard, back from a ban, will assume the role but Cleverley said: "Wayne has got all the attributes to be a top-class captain.

"He is a leader, a winner and I like playing underneath him as a captain."

Manager Roy Hodgson was delighted with Rooney's leadership against San Marino and sees the 26-year-old striker, who is now England's fifth-highest goalscorer, as a contender to lead the team on a more permanent basis in the future.

Cleverley appreciates Rooney's qualities at both domestic and international level and said: "Wayne was quite vocal in the dressing-room before [the San Marino game]. He was chipping in with points for the team, to improve the team.

Waiting to make an impact

"We are lucky at my club too - we have got so many people you can go to. For quite a young guy, Wayne has had a lot of experience that myself, Danny Welbeck and all the young players in the squad can tap into.

Cleverley admitted Rooney, who was captaining his country for the second time, was prepared to dish out verbal rollockings to team-mates if his standards were not being met.

"When you want to win so badly you'll do anything to do that and if people need telling Wayne's not afraid to do that, even in training," Cleverley said. "If I'm on his team and we're not winning he'll let me know."

Cleverley, meanwhile, says he is benefiting from playing for Great Britain at London 2012 during the summer.

"The Olympics were very important to me," the 23-year-old said.

"It was perfect to get games and play competitive matches on a big stage. Roy Hodgson was at a couple of the games, I was in good form and I have managed to carry that on into the season."

Cleverley's place in the side in Warsaw is under threat with the return of Gerrard.

Club colleague Michael Carrick is another player who could make way, but Lampard's continued absence because of injury gives Cleverley a bigger chance of making it five starts in five games for England this term.

However, Cleverley, who made his debut in the August is not taking anything for granted.

"I am really proud to have started all four games so far," Cleverley said. "I am always happy to represent my country, but I have a bit more hard work and a few more games ahead of me before I become established."