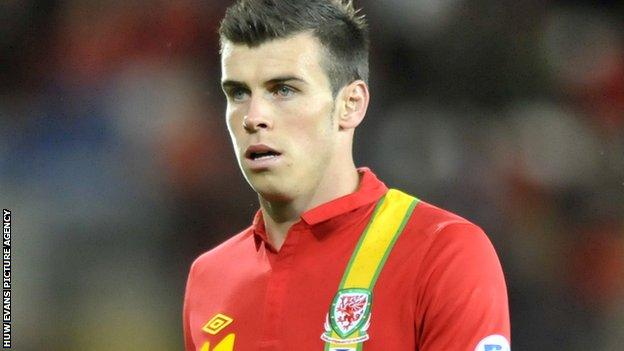 Davor Suker believes that Wales and Tottenham Hotspur winger Gareth Bale should move to Real Madrid, if he is given the chance.

Ex-Real Madrid striker Suker is now president of the Croatian Football Federation, whose side face Wales in a World Cup qualifier on Tuesday.

And Suker believes Wales' Bale would fit in at the Bernabeu.

"If he has the possibility to go to Madrid it would be his best move of his career," Suker told BBC Wales.

"So many clubs in the world have huge histories. Arsenal is a great club, Manchester United and Chelsea.

"For me Real Madrid is one of the best clubs in the world."

The current Spanish champions, who are coached by Jose Mourinho, are one of the clubs who have been linked with the 23-year-old Welshman.

Spurs have entered a partnership with Real Madrid in which will the two clubs will work together in respect of players, coaching and commercial relationships.

But the London club have denied the agreement allows Real Madrid to have first refusal on players such as Bale.

Bale is currently on international duty with Wales and scored both goals in Chris Coleman's side to scoop a dramatic 2-1 win over Scotland on Friday.

Next up for Coleman's side are unbeaten Croatia, a team Wales have never beaten at senior international level.

And Croatian Football Federation president Suker is fully aware of the threat posed by Bale.

"He's a very dangerous player and scored twice against Scotland and Bale can be a dangerous man in Tuesday night's game," added Suker, who also played for Arsenal and West Ham.

"He's a great football player and good for football to have great quality players. I wish him all the best but not on Tuesday night."

Croatia's squad includes a current Real Madrid player, Luka Modric, who up until the summer was a team-mate of Bale's at Tottenham.

Suker is proud Croatia's squad has players representing some of Europe's biggest clubs, including Modric at Real Madrid and Bayern Munich's Mario Mandzukic.

"He [Modric] played very well in the Premier League and of course he's part of one of the best clubs in the world," added Suker.

"We feel this in the stadiums and the training grounds.

"Croatian players are talented players, quality players and can play all around the world. More players at the big clubs is better for the national team.

"The premier objective of the national team is to go to [the World Cup in] Brazil."

Davor Suker will be among the guests on Radio Wales Sport at 18:30 BST