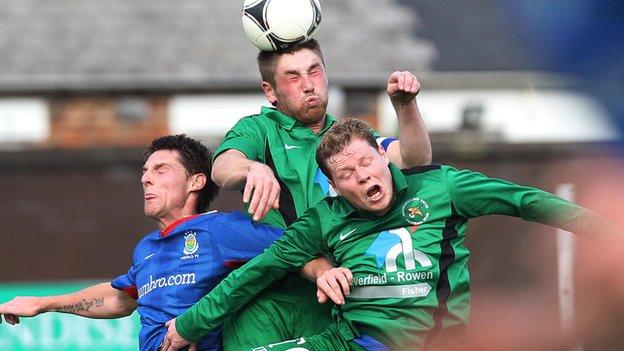 Premiership pacesetters Ballinamallard welcome back Mark Stafford and Mark McConkey for the visit of Crusaders.

Stafford returns from a ban and fellow defender McConkey has recovered from a hip problem, while foruth-placed Crusaders have no fresh injury worries.

"The Crues are a good side but they're coming down here and we're playing well - it should be a great game," said Ballinamallard boss Whitey Anderson.

He added: "We may be top but Crusaders are hitting form and if they get a run together they could challenge for the title."

The surprise leaders edge out Cliftonville on goal difference and the Reds host a Dungannon Swifts side without the suspended Terry Fitzpatrick.

Glentoran keeper Elliott Morris is suspended for the Oval encounter against Glenavon, who have striker Guy Bates unavailable because of a wedding.

It leaves DC two points adrifts at the bottom and striker Paul McVeigh is ruled out with an ankle injury ahead of game against Portadown at Shamrock Park.

Distillery will aim to build on that vital win when they entertain Ballymena United at New Grosvenor.

The Sky Blues expect to have Johnny Taylor back from injury but skipper Allan Jenkins and Denver Gage remain sidelined.