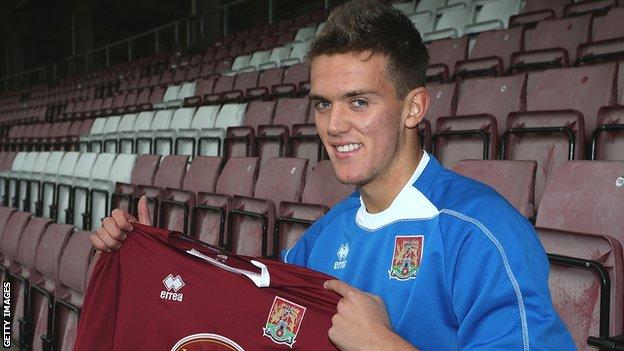 The Wales Under-19 midfielder, 19, joined on loan until 5 January and made his debut in the 3-0 win over Exeter, setting up Langmead's goal.

The Cobblers captain told BBC Radio Northampton: "I don't think anything will faze him - you can see why he's a captain [of City's Under-21s].

"You do have to adapt [to League Two] but we'll make sure we look after him."

Langmead continued: "He came into the squad on Thursday and settled in straight away. We knew he would be a really good addition."

The Cobblers moved to 12th in League Two with the victory over Exeter, three points outside the play-offs. They next face the league's bottom club, Barnet, on Friday night.

"We'll fancy our chances and we'll be right up for it," Langmead said. "But we're not going to get carried away after one victory."

Meanwhile, manager Aidy Boothroyd has expressed his satisfaction with Langmead's performances since making him captain at the start of the season.

The Cobblers have kept six clean sheets in all competitions.

"I'm a big fan of Kelvin," he said. "I made him captain because I think there's more to come from him but he's a real leader.

"He'll block things, he'll get his head on things and he's a real team player.

"With all the players, I'm pushing them to be better as a team and better as individuals."