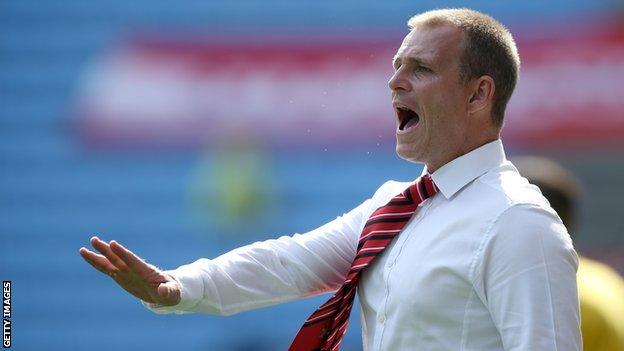 Smith felt Boro should have won a penalty and criticised the number of yellow cards issued to his men.

Midfielder Anthony Grant was sent off for two bookable offences.

"The stories and press releases about today's game should be about the referee, not about the game," Smith told BBC Three Counties Radio.

"He's made life difficult for himself by booking just about every individual who made a challenge in the first half. Obviously our guys have got to be more mindful of being on the field with such a pedantic individual.

Stevenage have committed 120 fouls and received 20 bookings and one red card in League One this season.

The league's worst offenders are Scunthorpe, with 149 fouls, 22 yellows and three reds.

Shrewsbury are the best behaved side, with 105 fouls, six yellows and no reds.

"Anthony put himself in the firing line and allows the referee to do exactly what he wants to do - which is to get the spotlight on himself and show that he's out there dictating the game.

"It wasn't the teams that dictated the game - it was the referee. If you want a big story you should be sticking this microphone under his nose because he'd like an article in the paper as well."

The result ended a seven-game unbeaten run for Stevenage, who remain second in League One, seven points adrift of

Two other Boro players received bookings, on top of Grant's pair of yellow cards, while three Colchester players were given warnings by the official.

Smith also blamed his side's finishing for the defeat, but made his contempt for Harrington's performance abundantly clear.

"You can tell my frustration and it's borne out of the fact it was a very competitive game. With 11 men on the field we walk away from here with a point at least," he said.

"I said to him at half-time - I was trying to be tongue in cheek - just about everyone in the ground must have thought there was something he had against us.

"It was an incredible performance from the ref in the first half. It was so positively Colchester."