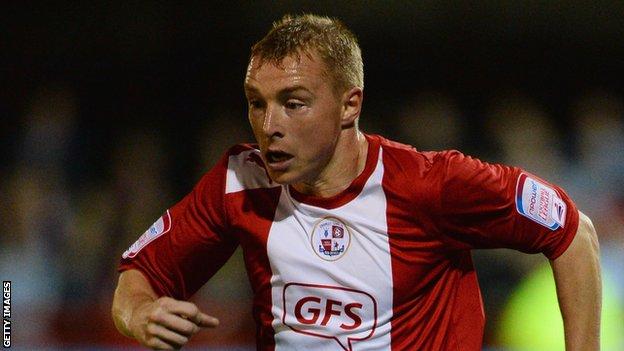 Crawley midfielder Nicky Adams says belief in his ability is behind his run of five goals in his last four games.

The midfielder, who joined the Reds this summer, hit a brace in Saturday's 3-2 win over Bury.

He told BBC Sussex: "I've had that confidence since I came here and feel like I am playing good stuff.

"The gaffer [Richie Barker] gives me the licence and freedom to go and express myself. I got one goal and they've all come at once."

The former Bury and Rochdale man, who turns 26 on Tuesday, added: "Hopefully I can continue helping the team.

"If I'm not scoring, if I can set them up for the lads I'll be happy with that."

Crawley's strikers have not scored in the club's last eight games in all competitions and Adams says it is important the rest of the team continue to contribute until their forward line end their barren run.

"It's good we can all chip in," he continued.

"It's not fair if we just leave it to the strikers. They work really hard, bring others into play and get the lads in great positions.

"We've got four great strikers and they're all going to score again.

"As soon as they get one they'll be back in the swing of things.

"But if we can all keep chipping in, it helps over the season."