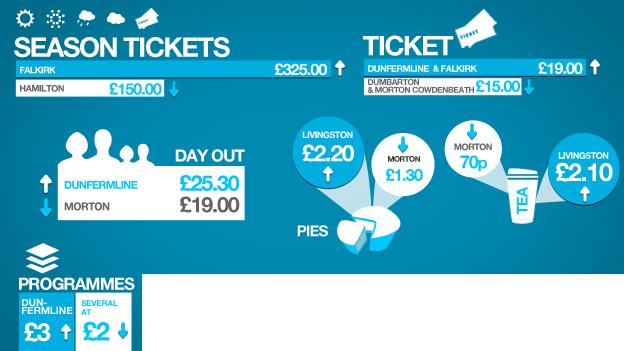 The total price of a programme, pie, cup of tea and cheapest adult ticket costs £19.

Cowdenbeath and Dumbarton both offer good value for money at £19.50 and £19.90 respectively.

At £23.70, Falkirk is the division's most expensive in the cheapest day out category.

Following relegation from the Scottish Premier League at the end of the 2011-12 season, Dunfermline Athleticare one of the most expensive sides to watch in Scottish First Division.

Their cheapest day out costs £23.30, matching that of Livingston, but it remains 40p cheaper than Falkirk.

However, if fans want to buy the best seats at Dunfermline's East End Park, they can expect a day out to cost them £25.30, the most expensive in the division.

Tracey Martin, marketing director at Dunfermline, said: "We set ticket prices by doing a comparison with all the clubs in the Scottish First Division, especially those of a similar size to ourselves.

Scottish Div One luxury day out

"We try to make the pricing as competitive and appealing as possible, with a focus on our younger fans and families."

Relegation hit the Fife club hard, with Martin revealing it cost the club "at least £1m in revenue".

"We certainly feel the product on the park is there for the supporters to be entertained and this has been reflected with a small increase in match ticket sales from last season in the SPL," she said.

"We have also increased the availability of our match-day family tickets and will be introducing kids' box meals in our catering kiosks, all to try to improve our offering to young people and kids."