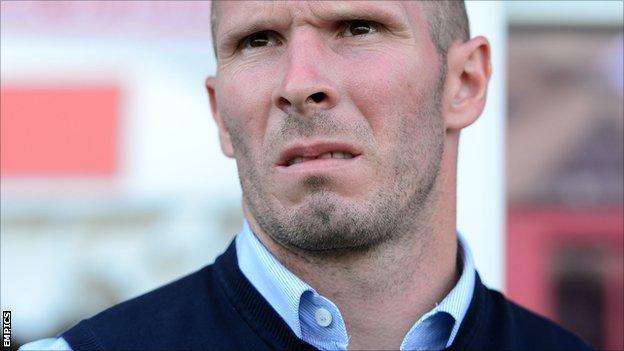 Michael Appleton has said he has had no time to think about managerial roles at other clubs, insisting he has enough to worry about as manager of Portsmouth.

Appleton, who has been linked with the vacancies at Burnley and Bolton, told BBC Radio Solent: "It's easy for me to put [the speculation] out of my mind.

"I can't control what other people around me think or do, how they react to it or how the players react to it.

"I've got a tough enough job as it is to start worrying about other jobs."

Former West Bromwich Albion coach Appleton, 36, was and, with Pompey crippled by financial problems, has been forced to completely rebuild his squad.

He was unable to prevent the club being relegated from the Championship earlier this year, but after 12 games of the new campaign, Portsmouth lie 12th in League One.

on 9 October, while Eddie Howe left Burnley to

Another man mentioned as a possible candidate for the role at Turf Moor, Fleetwood Town boss Micky Mellon, has said he is "fully focused" on his position at the League Two club.

Mellon has been in charge of the Cod Army since September 2008 and for the first time in their history earlier this year.

But the 40-year-old Scot told BBC Radio Lancashire: "I'm employed by Fleetwood. I'm fully focused on the work that I have here and the work I've got to do."

The Clarets have already started the search for a new boss, with chief executive Lee Hoos telling the club website that "football philosophy" will be the main criteria they will be looking for.

But Hoos confirmed to BBC Radio Lancashire on Friday that about a return to the club, almost three years after his acrimonious exit.