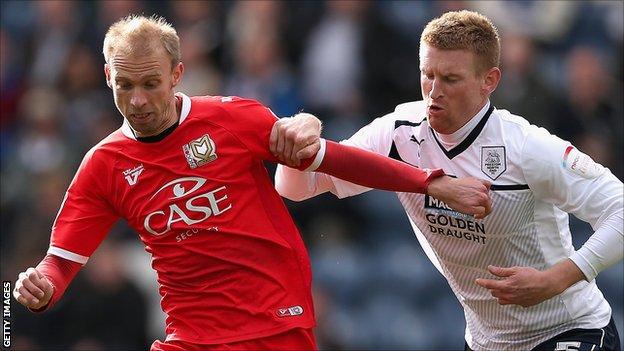 Chris Robertson's professional approach has earned the defender a route back into the Preston squad, according to boss Graham Westley.

The 26-year-old Scot, who has been out of favour at North End, made his first league appearance of the season as a substitute against MK Dons on Sunday.

"It was a really terrific display from him," Westley told BBC Radio Lancashire after the 0-0 draw at Deepdale.

"He's a great example of what can happen if you work at your game."

If you feel sorry for yourself and start blaming other people, you won't progress and the squad won't be as strong

Westley, who has paired summer signings Paul Huntington and Shane Cansdell-Sherriff in the centre of defence for much of the season so far, continued: "His [Robertson's] situation has been difficult because he has been out of the side and out of the 18.

"He's been tremendously professional behind the scenes and he's earned his way back into the 18.

"There's never a moment where he's not in the gym building on himself physically and he's talked to me a lot about what he's needed to do.

"If you feel sorry for yourself and start blaming other people, you won't progress and the squad won't be as strong."

Preston kept their first clean sheet since 18 September against the Dons, but were unable to register a third win in four League One games.