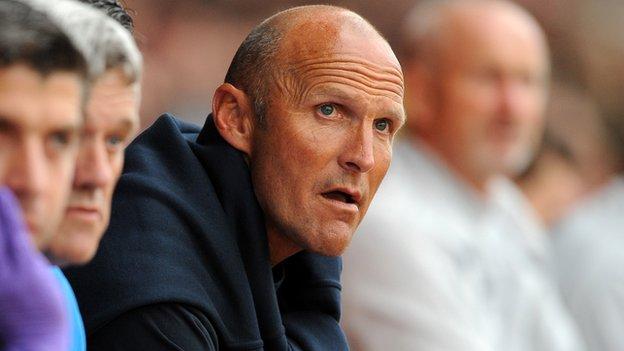 Kidderminster Harriers boss Steve Burr insists his side produced one of their best displays of the season on Saturday at Stockport, despite their nine-game unbeaten run coming to an end.

"I felt the first half was as good as we have played without scoring goals," said Burr, after his side's 1-0 defeat.

"It's always a difficult place to come but they had to change their shape to accomodate the way we were playing.

There's no getting away from the fact that Grimsby away is a very difficult tie. But, if we play like we did at Stockport and finish off some moves, I am am confident we can go through

"The problem we have is trying to catch up on those five successive defeats."

After opening the season with five straight losses, followed by five draws on the trot, Harriers then picked up 10 points out of a possible 12 to clmb out of the bottom four for the first time this season.

But Saturday's defeat plunged them back to 21st, before this week's break for FA Cup fourth qualifying round action.

And the Harriers boss admits that the draw has done them no favours in handing his team a trip to Grimsby Town.

"It will be like going to Stockport," he said. "It will be a similar type of game.

"There's no getting away from the fact that it is a very difficult tie for us.

"But, if we can play like we did at Stockport and finish off some moves then I am am confident we can go through."