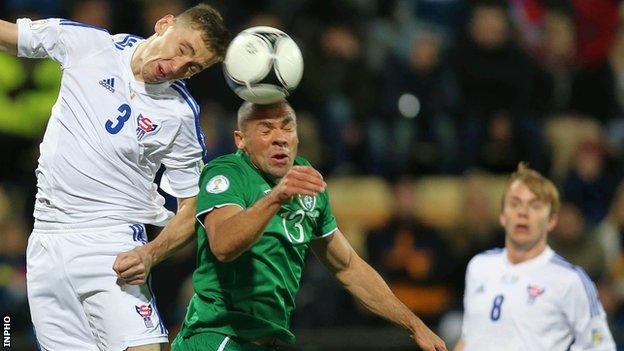 The Republic of Ireland scored four second-half goals to seal a vital win over the Faroe Islands in Torshavn.

The pressure was on Giovanni Trapattoni after the hammering by Germany, but the Irish have six points from three games.

After a blank first half, Marc Wilson's 25-yard shot and a header by his Stoke team-mate Jon Walters made it 2-0.

Arnbjorn Hansen got the Faroes back into contention but the Republic netted again with a Pol Johannes Justinussen own-goal and a Darren O'Dea header.

Veteran boss Trapattoni had insisted he would not resign as manager of the Republic but, according to the Irish media, the 73-year-old needed a victory over the Group C minnows to stay in his job.

The Irish certainly made a strong start and should have scored when Aiden McGeady crossed from the right, but Keith Andrews headed wide from a great position in front of goal.

As the half wore on, though, the small band of travelling supporters sitting to the right of Football Association of Ireland chief executive John Delaney were growing impatient.

However, the visitors' nerves were settled in the first minute of the second half, when Wilson let fly to put the Irish ahead.

It took a slight deflection off the head of full-back Jonas Naes before flying past helpless Faroes keeper Gunnar Nielsen and into the top corner for Wilson's maiden senior international goal.

That settled the Republic, who began to play with confidence, and they increased their lead within seven minutes.

Wilson crossed from the left for Walters to head firmly towards goal, and Robbie Keane did enough to put off keeper Nielsen, but not enough to justify his claims that he had got the final touch.

But just as it looked as though the Republic had the points wrapped up, they allowed Naes to make ground down the right and cross for Hansen to climb above John O'Shea and head firmly past keeper Keiren Westwood.

Suddenly, Ireland looked vulnerable, but hopes of a Faroes fightback were ended within five minutes when Walters broke into space down the left and sent in a cross that Justinussen turned into his own net.