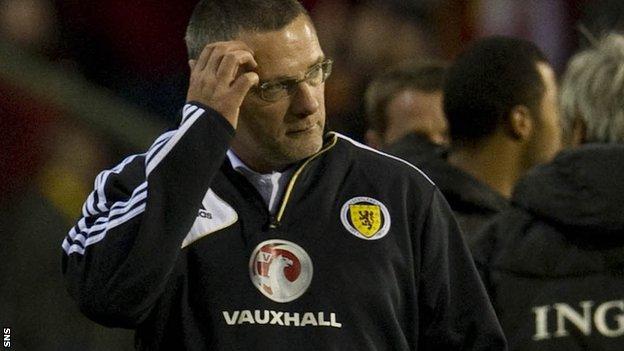 Scotland manager Craig Levein insists he wants to remain in charge of the national side despite World Cup qualification looking highly unlikely.

Belgium eased to a 2-0 win in Brussels that leaves Scotland bottom of Group A with two points from four matches.

"I'll continue to do the job to the best of my ability and we'll see what happens."

He added: "We can't keep hoping we're going to qualify for major finals and slide down the rankings.

"The fight's not gone out of this team and I've got to commend them for that.

"The fans were behind the team and made a lot of noise. I would have loved to have got a result for them."

Levein was under fire before Tuesday's match after Friday's 2-1 defeat by Wales in Cardiff extended their winless start to their qualification campaign for the 2014 World Cup.

The statistics since Levein succeeded George Burley as national boss make grim reading, with the former Hearts, Leicester and Dundee United manager presiding over just three wins in 12 games - two of those coming against Liechtenstein.

It seems certain now that Scotland's absence from major international tournaments will be extended to 16 years.

They were no match for an in-form Belgium on Tuesday. Christian Benteke headed the home side into the lead in the 69th minute, before Manchester City's Vincent Kompany fired in a sublime shot from the edge of the area to secure victory.

Levein admitted that his players failed to mount a significant challenge against a quality side.

"I felt Belgium had run out of steam a wee bit and it was a terrible time to lose a goal. Let's not kid ourselves, they're a very good side," Levein told BBC Scotland afterwards.

"Sometimes all you need is one goal; we did enough to create the chances but not enough to get that goal.

"The question was could we take our chances? In all honesty, they were too good for us.

"We must look at a team like Belgium and aspire to be as good as them. They changed their youth set up about 12 years ago."