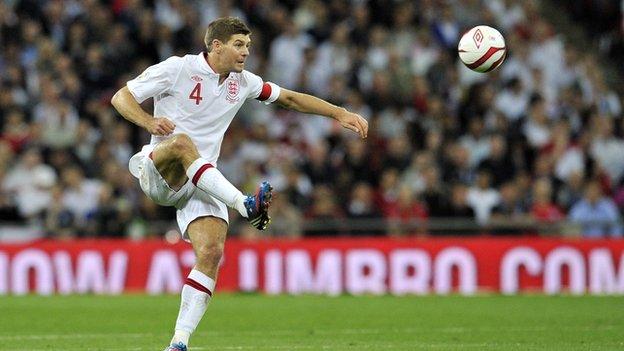 Steven Gerrard has hit back at Patrick Vieira's suggestion that England players do not love playing for the national team.

The former France midfielder, 36, said he was surprised "so many young players" pulled out of the England team with injury stating "maybe it is a lack of love".

"It surprised me to read that," responded England captain Gerrard.

"I don't really care what Vieira says. The young players are hungry."

He added: "The impression I get from young players at Liverpool is that they are desperate to get into this set-up. This is what I notice and you can see it in their faces that it disappoints them when they are left out."

We know we have to behave and there is no excuse any more. It's about focusing on getting things right on the pitch

Meanwhile, Gerrard insists there is now "no excuse" for bad behaviour from players following the introduction of a new code of conduct.

Former captain John Terry and Chelsea team-mate Ashley Cole have both been sanctioned by the Football Association following recent incidents.

Gerrard said: "We have to behave."

Terry ended his England career after he was charged by the Football Association with racially abusing QPR's Anton Ferdinand - despite being cleared in court - and is currently deciding whether to appeal against a four-match ban and a £220,000 fine.

Cole has admitted a misconduct charge following an abusive tweet aimed at the FA after his evidence to an independent commission, which found Terry guilty, was questioned.

Gerrard hopes the distractions are over and said: "It is critical. These games are very important. We'd rather be sitting here answering questions about football.

"The players are well aware of that now. We had a meeting at St George's Park last week and have the code of conduct in writing. We know we have to behave and there is no excuse any more. It's about focusing on getting things right on the pitch.

"We received the code of conduct in booklet form and had a meeting about it. We've not spoken about it. It is common sense. It is important we do behave away from the pitch."