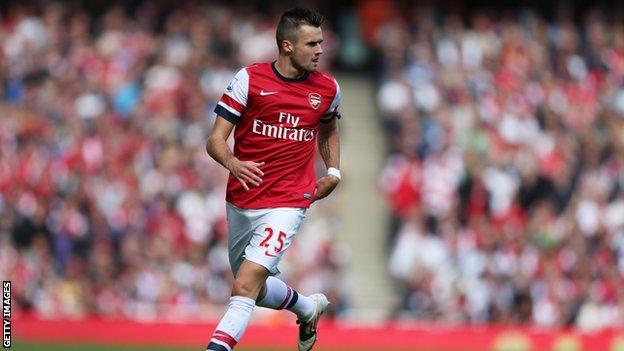 The 20-year-old is not yet eligible to play for England, as he has represented Finland's under-21 side.

However, he trained with the full England squad on Sunday ahead of the World Cup qualifier in Poland.

Jenkinson, whose mother is Finnish, worked with the seniors because of a calf injury to right-back Kyle Walker.

He made it very clear he wanted to play for England

He has impressed Hodgson and his England scouts this season.

Now, Jenkinson has confirmed he wants to play for England and the Football Association will press ahead to get clearance.

Hodgson said: "He didn't take a lot of convincing. We had a problem with Kyle Walker and wanted a full complement in our training session, so we called Carl up. He was in my thoughts anyway.

"I invited him to train with us knowing full well he couldn't take part in this game, but it gave me the opportunity to sit down and ask him the question.

"I don't want to trick him to play for England in a few minutes in a game to block him, but he had to make a decision because we're very interested in him, even if the competition is tougher to get him into the England team rather than the Finland team. He made it very clear he wanted to play for England."