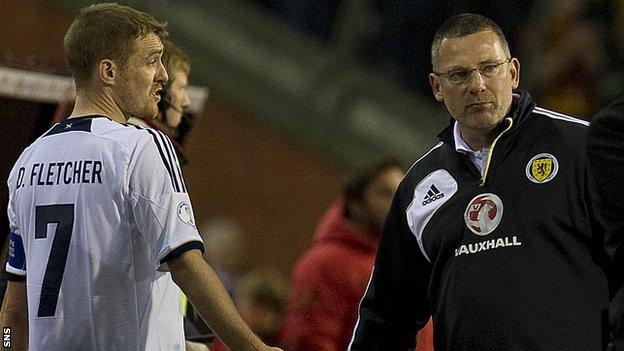 Scotland captain Darren Fletcher insists the players remain supportive of Craig Levein, despite pressure mounting over his future as manager.

The Scots to all but end their hopes of qualifying for the 2014 World Cup Finals.

"It's disappointing. We've got two points and we're sitting bottom of the group," said Fletcher.

"It's not happened so far in the group, but we're fully behind the manager."

Scottish resistance was broken in a three-minute spell when Christian Benteke powered in a close-range header on 69 minutes and captain Vincent Kompany hammered in a fierce shot soon after.

Fletcher admitted that Scotland's position at the bottom of Group A was disappointing, but the players had worked hard against a quality side and would try to make amends in the forthcoming matches.

"The players were out there playing for the manager," said Fletcher. "There's not a player who came out and chucked it.

"You need luck in international football and we've not carried it.

"Ultimately, we are where we are and sometimes there's no hiding from it. We have to face up to that responsibility.

"There's no point in getting out heads down. We'll look to the next games and try to get some points. It's disappointing. We've got two points and we're sitting bottom of the group."

Keeper Allan McGregor conceded that although defeat by Belgium was a crushing blow, the entire squad remained behind Levein.

"We expected it, to be honest," said McGregor.

"It's just unfortunate how things turned out. I thought we defended for our lives, we worked really hard - but it wasn't to be.

"I know a lot of folk tomorrow morning will not think so, but me and I'm sure I can speak for all the boys as well - everbody is 100% behind him."