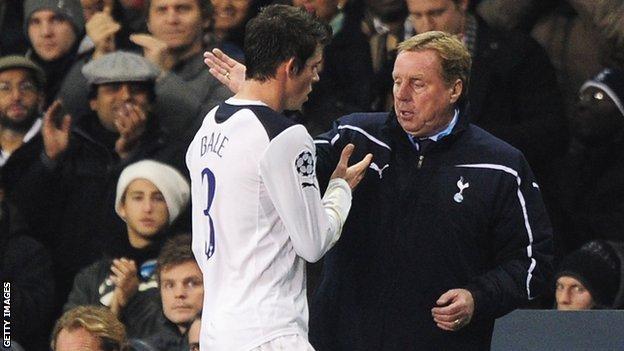 Harry Redknapp has warned Croatia that Wales' Gareth Bale is in the class of Cristiano Ronaldo and Lionel Messi.

Wales visit Croatia in Tuesday's World Cup qualifier and Bale's ex-club boss insists the Tottenham man is the "full package" and would "improve any team".

"He's an amazing talent and he's after the Ronaldos and Messis of this world and he's getting better and better," Redknapp told BBC Radio Wales Sport.

"He's almost unplayable when he's on his game. He is a genuine world-class player.

"There's nobody he couldn't play for. He'd improve any team."

"It was amazing how he turned the game around," continued Redknapp.

"He can do everything and could play anywhere. He's the full package.

"He can head it, he can dribble, he can shoot, he's got a great physique, he's an amazing athlete, he can score with both feet - there are no weaknesses in his game.

"He is already at the top but any team in the world would love to have Gareth Bale playing for them.

"And he is a great lad as well with a good family behind him. It couldn't happen to a nicer lad."

Redknapp managed Bale, who was named Professional Footballers' Association Players' Player of the Year in 2010-11, during his four years at Tottenham.

And he was his boss when Bale shot to international prominence with his first hat-trick in Spurs' Champions League defeat at Inter Milan in 2010.

"It was a great performance the other night," said Redknapp.

"The one in Milan when we had 10 men, to do what he did to Maicon who, at the time, was rated as the best right-back in the world, that really destroyed his career almost. It was amazing."

"It's probably the best I've seen [from a Wales player]," said Thomas.

"The only difference is they play for Barcelona with players like Messi. He's at Tottenham.

"Let me tell you, he will be at one of those clubs before too long. Those top teams - Barcelona and Real Madrid - will be fighting for his signature, for sure."