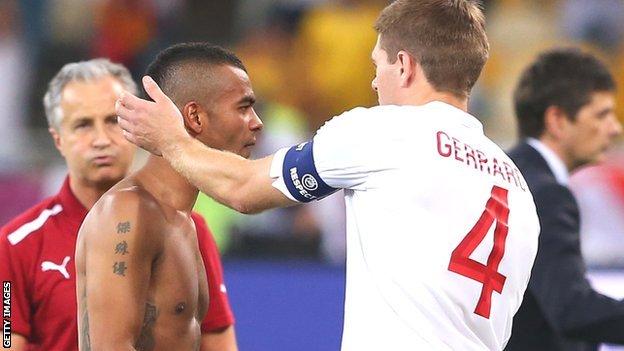 England captain Steven Gerrard believes the quality of Ashley Cole should be enjoyed while he is at his peak.

Chelsea left-back Cole and Gerrard both have 98 caps ahead of Tuesday's World Cup qualifier against Poland in Warsaw, with both expected to play.

Gerrard said: "It's been a pleasure to play with him over the years.

"He's been one of the best left-backs this country has ever produced. Let's enjoy the last few years of his time with us."

Cole admitted a misconduct charge after an abusive tweet aimed at the FA when his evidence to an independent commission, which found John Terry guilty of racial abuse against QPR's Anton Ferdinand, was questioned.

He is expected to replace Everton's Leighton Baines against Poland to win his 99th cap.

Gerrard now wants concentration to be focused on Cole's quality as a player and added: "I don't know what the media's opinions are of him. He's a top player and it's important to speak about him as a player.

"He's a bit like me in that he is quite quiet privately, reserved in the squad, but he comes alive on the pitch."

England manager Roy Hodgson agreed - but insists Cole is under more pressure than ever before from Baines and others.

"We also have some interesting younger left-backs like Kieran Gibbs and Ryan Bertrand. It's been a problem position for many countries I've worked for but now we're very well off and that's encouraging."