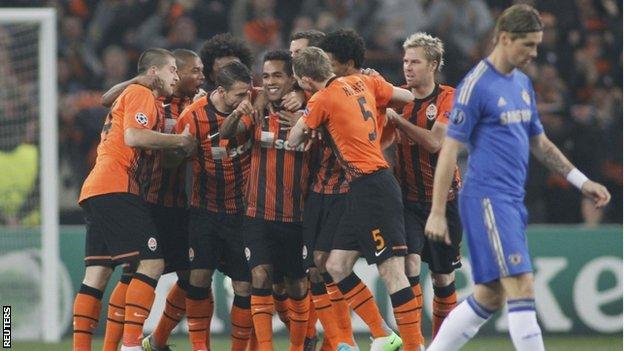 Chelsea's hopes of defending their Champions League crown suffered a setback in Donetsk as Shakhtar dominated a firecracker of a match.

With John Terry back captaining the side, Chelsea were well beaten thanks to goals from two Brazilians.

Alex Teixeira poked home after three minutes before Fernandinho doubled Shakhtar's lead in the second half.

Oscar thumped in a late consolation for Chelsea, who would have lost more heavily but for goalkeeper Petr Cech.

The defeat, Roberto Di Matteo's first in the Champions League, means English teams have now failed to win in Donetsk in four attempts and leaves Chelsea with a less than straightforward path to the last 16.

The failure of Juventus to beat Nordsjaelland in Denmark was the only saving grace, but Shakhtar are now firmly in control of Group E.

Defeat capped a week of a distraction and disruption at Stamford Bridge. But at the final whistle Terry's return was nothing more than a footnote, as he led Chelsea out for the first time since accepting a four-match ban for racially abusing Anton Ferdinand a year to the day since the pair exchanged those infamous words.

Chelsea saw this as an opportunity to draw a line under the controversy but Shakhtar's formidable record could not be ignored. The Ukrainian champions came into the game unbeaten in 11 months on the back of a record 21 consecutive league matches without a loss and having scored in every game in that run.

They provided a perfect demonstration of just why inside three minutes as Chelsea were caught cold.

Luiz Adriano controlled a quickly taken throw-in on his chest, surged beyond David Luiz and shot hard and low at goal, only for Terry to block. The ball rebounded kindly to Teixeira, who kept calm to roll a low shot through the legs of Ashley Cole and across the advancing Cech into the bottom corner.

Shakhtar were tremendous throughout, shredding the Chelsea defence time and again - they pressed and ran, created and scored. The intensity of their football was embodied by the magnificent Willian, who only added to his burgeoning reputation with this dynamic display.

The Brazilian played with pace and intelligence, attacked with gusto and controlled the play with his trickery and precise passing. On three occasions he created shooting opportunities, with a drop of the shoulder and twinkle of the toes. He created openings too, feeding Darijo Srna whose goal-bound shot was blocked by Terry.

Shakhtar give Chelsea the blues

Cech was keeping Chelsea in the tie as half-time approached. First he needed to be at full stretch to tip Henrik Mkhitaryan's fierce shot over, before diving low to his left to somehow deny Tomas Hubschman after a goalmouth scramble from a corner.

Chelsea were always a threat, however, even after Frank Lampard limped off with an injury after 18 minutes to be replaced by Eden Hazard. The best of their opportunities fell to Torres, but on each occasion the Spaniard was denied either by goalkeeper Andriy Pyatov or saw a shot smothered by the Shakhtar defence.

The only consolation for Chelsea was that they remained in touch at 1-0. But not for long.

With Chelsea pushing on in search of an equaliser, Shakhtar landed a decisive blow. Fernandinho dispossessed Hazard in the centre circle, Adriano gathered it up, broke forward and played the ball sideways to Fernandinho who finished emphatically with a low shot that flashed across Cech and into the far corner.

Chelsea improved after the goal, with Hazard going close with a shot that was well-saved by Pyatov. But Shakhtar always looked more likely to score.

Fernandinho might have scored his second after a neat exchange with Willian, while Cech denied Mkhitaryan with another fine save. Hubschman had perhaps the best chance of the second half, but failed to make contact when the ball fell to him four yards from goal.

As it was, Oscar snatched a late consolation for Chelsea, turning in a low cross after a surging run from Branislav Ivanovic, but the damage was done.