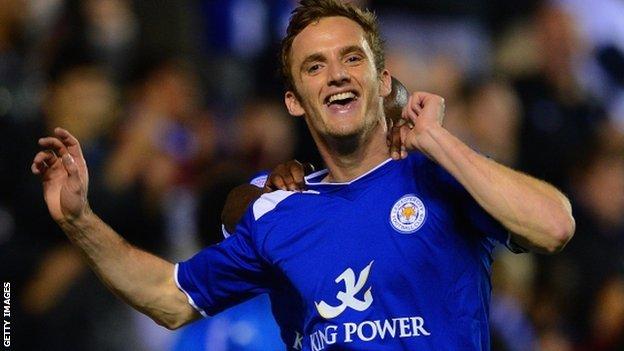 Midfielder King scored the only goal of the game - a shot from close range after his initial effort was blocked.

Brighton won a penalty 10 minutes after the break when defender Zak Whitbread fouled Will Buckley.

But Kasper Schmeichel dived left to save the spot-kick from Ashley Barnes, who fired the follow-up over the bar.

The Foxes could have scored more after taking the lead.

Martyn Waghorn fired over from Ritchie De Laet's cross, before Anthony Knockaert forced a save from Tomasz Kuszczak.

Brighton also created chances, Liam Bridcutt seeing his free-kick pushed wide by Schmeichel, while Craig Mackail-Smith, who had been quiet, was inches away from connecting with a cross from Bruno Saltor.

However, the result means Brighton have now failed to win in five games.

"After the draw at Birmingham it was important to get maximum points from this match and the Crystal Palace game coming up on Saturday.

"They are both tough matches and this league is pretty relentless. So all credit to the players.

"They have worked hard in games and on the training ground, to get us to where we are at the moment."

"I have been saying the same thing for the last four or five weeks.

"No matter how you play, how well you pass the ball and keep the ball it is all about scoring goals.

"I am getting bored listening to myself because it is always the same. I don't try to put myself in a better position than we are.

"The table shows we lost 1-0 and it was the same last week and the week before."