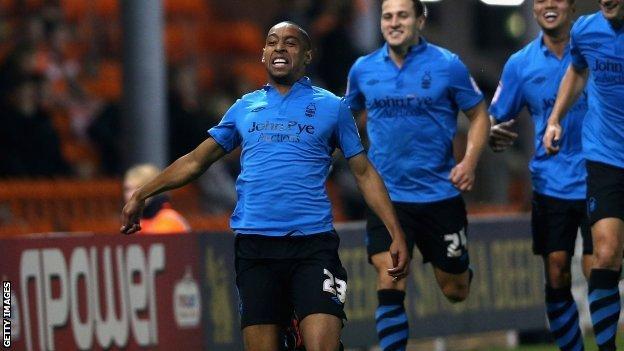 Substitute Dexter Blackstock salvaged a point for Nottingham Forest with an injury-time strike at Blackpool.

Billy Sharp opened the scoring with his second goal for Forest, flicking in from close range after Danny Collins's deflected shot fell into his path.

Elliot Grandin grabbed the equaliser when he headed in Matt Phillips's cross before Gary Taylor-Fletcher drove in the second 15 minutes from time.

The hosts had created the first good chance of the night when Stephen Crainey clipped the outside of the post with his shot following a good one-two with Tom Ince.

And Taylor-Fletcher also went close when he took the ball round keeper Lee Camp, but saw his shot cleared by Greg Halford.

But Sharp put Forest ahead and midfielder Andy Reid was then inches away from giving them a 2-0 lead with a free-kick that flew narrowly wide.

Grandin and Taylor-Fletcher put Blackpool in front, before Sharp had a brilliant chance to equalise, miscuing his shot when one-on-one with Gilks.

But in the 90th minute, the visitors ensured they would come away with a point when Blackstock chested the ball down and finished well.

The result leaves Forest in 10th on 18 points and Blackpool a place and a point behind.

"I said in the team meeting if Billy Sharp scores against us - he always does - then we shouldn't be bothered. The team laughed but then he went and scored.

"The point I was making though, was that we need to keep our heads up and keep our body language positive, which to our credit I thought we did.

"We have to work through our team because we don't have a big man up top to go direct. We have to pass our way through."

"I'm not disappointed with just a point, I think at some point you know Ian Holloway will throw caution to the wind and it's difficult to know what to do.

"Do you keep what you've got or try and go at them with four forwards on the pitch? The game petered out; we looked fine and then lost two goals.

"They kept plugging away, to give them some credit. His subs changed things for Blackpool and our changes, with Dexter coming on, changed it for us."