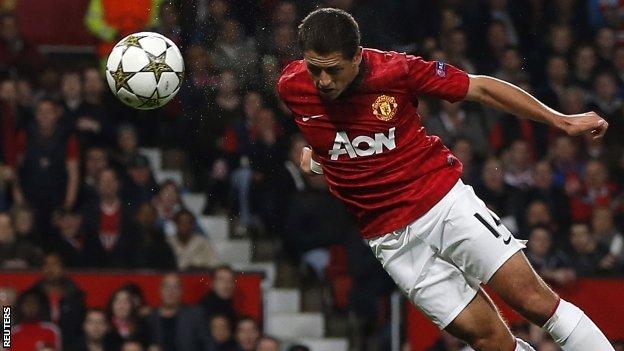 Manchester United survived the shock of conceding two early goals to move a step closer to the Champions League knockout phase with victory over SC Braga.

It was the sort of slow start that has threatened to undermine United this season, but Mexican Javier Hernandez took advantage of the opportunity to make his mark by leading the fightback.

Hernandez scored with a far post header to put United back in the game before half-time and, after Jonny Evans scrambled an equaliser, he was on the mark again as he rose to beat Braga keeper Beto for the winner with 15 minutes left.

United manager Sir Alex Ferguson wanted a third successive victory in the group stage to move his side closer to the target of 10 points he believes will ensure a safe passage into the last 16.

Kings of the comeback

United's victory over Braga sees them join Arsenal as the second team in Champions League history to win twice after trailing by two goals.

United's other comeback from 2-0 down came in the second leg of their 3-2 1999 semi-final win over Juventus.

And while he will be delighted by the verve and finishing shown by 24-year-old Hernandez as he demonstrated his determination not to be overshadowed by Wayne Rooney, Robin van Persie and Danny Welbeck, Ferguson will once again have concerns about how easily United are conceding goals.

For all those faults, however, United's character can never be doubted and they deserve great credit for the manner in which they recovered from such a dreadful start.

Ferguson has already noted with indignation how often his side have fallen behind this season - and here was no exception as the opposition scored first for the eighth time in 12 games.

The game was only 90 seconds old when former Newcastle midfielder Hugo Viana crossed from the left for Alan to head low past home keeper David de Gea in front of the Stretford End.

United were sleepwalking their way through the early stages and paid for it again as the visitors doubled their lead after 20 minutes. Michael Carrick, never a comfortable fit in central defence, was embarrassed as Eder showed great technique to cross for Alan to apply another clinical finish inside De Gea's near post.

Ferguson looked nonplussed but he was at least cheered by a swift response as Hernandez pulled a goal back with a header at the far post from Shinji Kagawa's cross.

"This was United's season in microcosm. The night started with the shambolic defending that has scarred their campaign, and ended with another rescue act performed by the rich attacking resources Ferguson has assembled."

The same pair were in action again as United were unfortunate to have a goal ruled out for offside. The flag went up as the Japanese midfield player crossed for Hernandez to score but replays confirmed the goal should have stood.

Kagawa was not seen after half-time as Ferguson gave the hosts extra width and pace with the introduction of Nani. It provided the impetus required as they drew level just after the hour.

Van Persie's corner created confusion in the Braga box and, after one unsuccessful attempt to make contact, Evans stabbed the ball over the line beyond Beto.

As United applied concerted pressure, Beto then did well to save from Nani after he was released on the edge of the area by Hernandez's fine pass.

Hernandez had been a constant threat and he was rewarded with his second goal after 75 minutes as United completed the turnaround. He showed his trademark clever movement in the area but credit must also be given to a magnificent cross from Tom Cleverley that allowed him to rise and head past the exposed Beto.