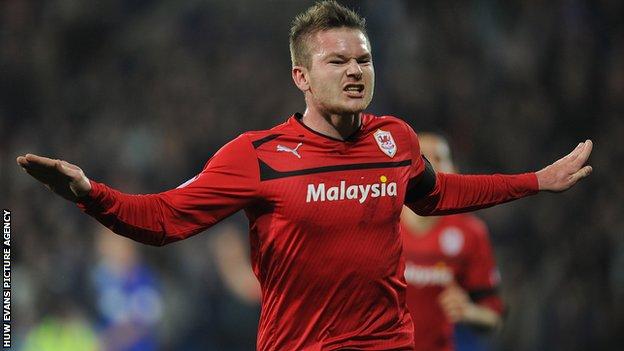 Aron Gunnarsson scored an injury time winner as Cardiff hit back to beat nine-man Watford to maintain their 100% home record.

Tommie Hoban scored from close range to give Watford the lead but Daniel Pudil was sent-off after striking out at Craig Noone.

Peter Whittingham levelled from the spot after a hand ball before Nathaniel Chalobah was shown a second yellow.

And Gunnarsson headed home the winner from Noone's cross in injury time.

Victory saw Malky Mackay's side set a new club record of six successive home league wins at the start of a season.

Craig Bellamy and Noone returned to Cardiff's line-up and defender Ben Turner started only his third game of the season.

Alex Geijo, Matej Vydra and Yeates were the changes to the Watford side which had beaten Peterborough.

Bellamy looked lively early on and he felt his side should have been awarded a penalty after his run was brought to a halt by Marco Cassetti.

On-loan Watford striker Vydra's low drive was palmed away for a corner by David Marshall while Cardiff's Turner headed wide from Noone's corner.

But it was Watford who took the lead against the run of play on 27 minutes through 19-year-old Hoban.

Marco Cassetti's header at the near post was kept out by Marshall and Hoban stabbed the ball home from close range in a packed penalty area.

Having fallen behind, the home side were finding it hard to break down a well organised Watford, who were also looking threatening on the break.

Bellamy, who had received treatment following his earlier clash with Cassetti, failed to reappear for the second half and Joe Mason replaced the Wales striker.

Watford could have extended their lead 10 minutes into the second half when Alex Geijo, making his first start, forced Marshall into a full-stretch save.

But Gianfranco Zola's side were reduced to ten men on 63 minutes when Pudil was sent off after striking out at Noone.

Whittingham stepped up and drove his shot down the middle to level the scores for his seventh goal of the season.

Things went from bad to worse for Watford minutes later when defender Chalobah was shown a second yellow card for petulantly kicking the ball away.

Almunia denied Noone and it looked as though Watford would earn a point before Noone's cross was met by the unmarked Gunnarsson.

The goal was history in the making as Cardiff secured a sixth successive home win to maintain their promotion push.

"We knew it was going to be a tough game, it's why Watford have won the away games they have this season. They sit in and they've got quality on the counter.

"We knew we were going to have to be very patient and I think we were. My message at half-time was to be calm, keep probing and shifting the ball quickly. It was moments of quality that really counted.

"It's very cruel, not just for me but for the players because of the way they played and performed.

"To see them come away with a defeat is hard to take. I feel sick for the players.

"At 11 versus 11, we were 1-0 up and in control. The balance of the game changed completely with the red cards."