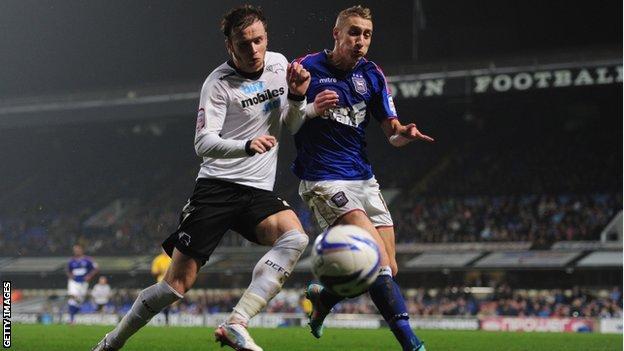 Nathan Tyson snatched a late winner as Derby came from behind to leave Ipswich bottom of the Championship and the future of manager Paul Jewell in doubt.

Ipswich took a deserved lead when DJ Campbell turned in from close range midway through the first half.

Derby levelled just before the break when Theo Robinson capitalised on an error from goalkeeper Stephen Henderson before substitute Tyson struck.

Ipswich have not won any of their last 11 games and have yet to win at home.

Peterborough's home win over high-flying Huddersfield means Ipswich slip to the bottom of the Championship.

The home side had made a strong start with Rams goalkeeper Adam Legzdins forced into three saves inside the opening 10 minutes as he denied Lee Martin, Aaron Cresswell and Jay Emmanuel-Thomas.

It came as no surprise when Ipswich took the lead in the 24th minute when Martin's ball into the box was turned in by Campbell for his second goal in three appearances.

Emmanuel-Thomas almost made it 2-0 on the half-hour but Legzdins produced a stunning save to tip his six-yard strike around a post.

But Derby struck back five minutes before the break. Henderson spilled a shot from Connor Sammon and Robinson was on hand to tuck home the rebound, his third goal in four games.

Having been on the end of some sustained Derby pressure during the second half, Ipswich went close through Martin in the 62nd minute before Emmanuel-Thomas had an effort from 30 yards.

However, Derby had the final word when Tyson scored from close range to pile further pressure on manager Jewell.

Ipswich assistant boss Chris Hutchings said: "Paul is manager of the football club at this moment in time. He's in the office watching the DVD. He wears his heart on his sleeve and he's very disappointed because we've conceded another goal late on, as we have on four or five occasions now.

"When that happens it hurts. Now we've got to come out fighting for another game on Saturday. We're bottom of the league but we're going about our jobs, unless we're told otherwise."

Derby manager Nigel Clough said: "It was deserved, on the balance of play, and some of the stuff we played in the second half was exceptionally good. You're always worried when you have so much of the game and it's still 1-1. It only takes one little mistake or set-play and you end up losing 2-1.

"But I think we deserved it and we're five games unbeaten now, which makes me delighted. Conor Sammon couldn't have done anything more, other than score a goal. He was absolutely superb. He won his headers, held the ball up, made two goals and terrorised the centre-halves. He was outstanding."