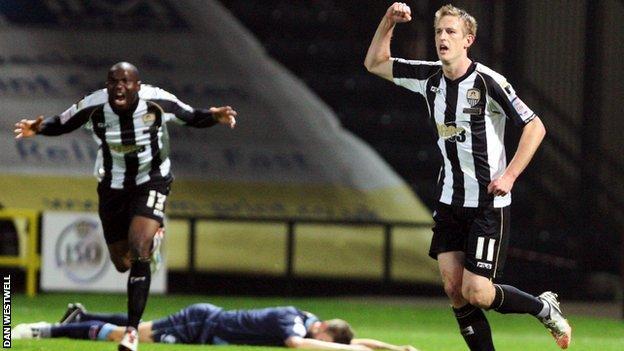 Jeff Hughes netted the hosts' first before Yoann Arquin doubled the lead by seizing on a defensive error.

Harry Arter and Jamal Campbell-Ryce exchanged penalties before Tubbs's 85th-minute intervention made it 3-3.

Notts remain in the League One play-offs while Bournemouth are four points clear of the bottom four.

"It teaches you something, doesn't it? You don't switch off at 2-0 up.

"I think everybody at the stadium thought 'well that's it, we've broken the hoodoo, it's a comfortable win. All we've got to do is roll out 45 minutes, be solid, be professional, play the game at our tempo and we'll win the game'.

"We found ourselves 2-0 down against the run of play and it was a really good second half performance that has got us out of trouble again.

"We had a terrific spell in the second half and that got us back in the game. We've got a bad habit of passing backwards and not forwards and playing with two strikers helps that.

"We were chasing the game so needed two strikers on the field. We've showed great character and Steve Fletcher played his part in the equaliser and made an impact when he came on.

"I've not seen him play for a while, he's still just as bad in training as I remember but Fletch played such a big part in the goal and it was a great finish from Matt Tubbs."