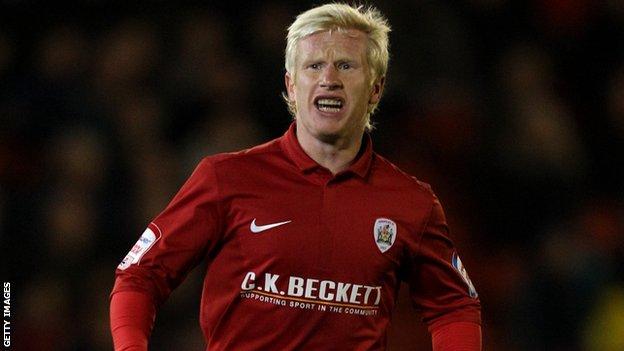 The Barnsley midfielder struck after Glenn Murray's first-half opener had put Palace on course for victory.

Assistant boss Lennie Lawrence and first-team coach Curtis Fleming were in charge of Palace after Freedman agreed to take the manager's job at Bolton.

Palace, who extended their unbeaten run to nine matches, had a great early chance when Murray fired over with a first-time shot from Yannick Bolasie's left-wing cross.

But the striker was clinical from Parr's delivery in the 11th minute, giving Barnsley keeper Ben Alnwick no chance.

Alnwick then clawed away Murray's back-post header from an Owen Garvan corner, and Barnsley boss Keith Hill responded with a tactical switch to bolster his midfield - bringing on Matt Done for forward Chris Dagnall.

The change brought a response from the home side, who were missing eight-goal top scorer Craig Davies because of a hamstring injury.

Marlon Harewood's effort was blocked by Damien Delaney before Done forced Palace goalkeeper Julian Speroni to make an excellent save.

In the second half, substitute Danny Rose fired over after being teed up by Harewood, but Barnsley had a let-off when Kagisho Dikgacoi's cross-shot drifted over Alnwick and hit the inside of the post.

They made the most of it as Perkins levelled when he picked up a loose ball on the edge of the area before curling a shot into the top corner.

"I'm slightly frustrated. We once again help the opposition's tactics. They defend excellently and exploit the counter-attack but it was helped by our inadequacies.

"It took a marvellous piece of ability from David Perkins, because I couldn't see us breaking down the block.

"His performance was incredible. I'm really pleased that he scored that goal."

"I don't know what happens now, we just take it day by day and pitch up tomorrow and see what transpires. I can't speculate on what might happen as the decisions are for the owners to make and we'll just carry on until sometime tells us otherwise.

"Dougie phoned us before the game to wish us well, which is typical of him. It's been a great experience working under him and terrific experience to work at Crystal Palace - the owners have been very supportive."