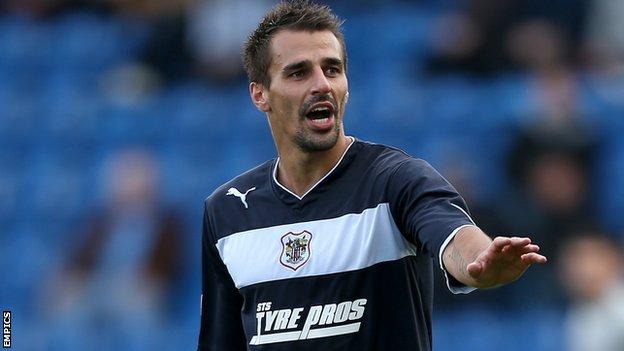 Stevenage continued their impressive form as midfielder Filipe Morais scored his first ever goals for the club to secure victory over Portsmouth.

The Portuguese headed in Lucas Akins's cross before Wes Thomas thought he had levelled, only for Mark Roberts to clear brilliantly off the line.

Jon Harley did equalise with a superb turn and shot from outside the area.

But Morais grabbed his second and the points when his cross eluded everyone and found the net.

Portsmouth applied late pressure but suffered their first league defeat in six games, while Stevenage have only been beaten once in their last 10 and closed the gap on League One leaders Tranmere to one point.

"I felt the first half wasn't particularly great and we didn't start well enough.

"I was happy with the performance in the second half, we moved the ball better and created a few opportunities but lost to a poor, poor goal.

"Wes will be a hand full for any defence but it just didn't quite happen for him in front of goal and I'm sure he'll make up for that at Sheffield United.

"We would love to keep Wes here, but we'll have to talk to Bournemouth and hopefully we'll get the right answer.

"It was a frustrating game, we played well, but I am disappointed with the way we lost the game."