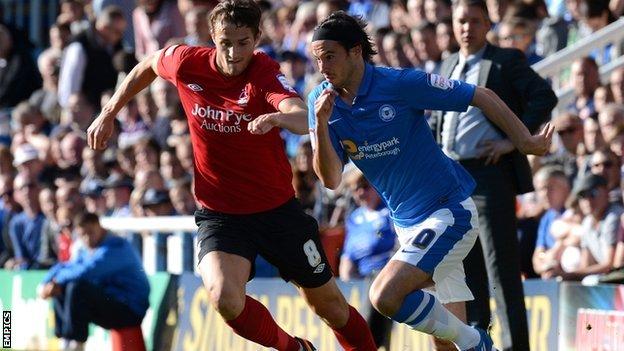 George Boyd struck twice as Peterborough beat Huddersfield to secure their first home win this season and move off the bottom of the table.

Saido Berahino set up both of Boyd's first-half goals, the second a superb effort from 35 yards.

Boyd then crossed for Kgosi Ntlhe to add a third on 48 minutes.

Huddersfield's Adam Hammill fired into the bottom corner to pull one back but the visitors slipped to sixth in the Championship.

Posh had lost all five previous league games at London Road this season, but striker Boyd opened the scoring in the 16th minute when teenager Berahino laid the ball off to his team-mate to fire in from the edge of the box.

Lee Tomlin then had a shot blocked by Huddersfield midfielder Adam Clayton before Peterborough pair Berahino and Boyd combined again to double their side's advantage in the 24th minute.

This time Berahino, on loan from West Brom, slipped the ball inside to Boyd from the right and the Posh forward unleashed a low shot from 35 yards to chalk up his fifth of the season.

Berahino could have extended the lead before the break but pulled his shot wide. It mattered little as three minutes after the re-start Boyd crossed for Ntlhe to score with a header.

Hammill, on loan from Wolves, cut in from the left to the edge of the area and drilled a right-footed shot into the bottom corner.

The visitors then enjoyed their best spell but Boyd came closest to scoring next as he miscued with the goal at his mercy.

Peterborough manager Darren Ferguson: "George's first goal was very good, but his second was nothing short of world-class.

"He has had a little look, spotted their keeper off his line and executed his shot brilliantly. If Lionel Messi had done that you would be seeing it over and over again.

"We're very happy to pick up our first home win of the season. It has been a long time coming."

Huddersfield boss Simon Grayson: "There is no doubt Peterborough deserve their victory. They have been struggling of late and we arrived on a high, but it goes to show what can happen in this league.

"We received plenty of hype after the weekend and I wanted to give those players the chance to get another win, but maybe I should have made changes."