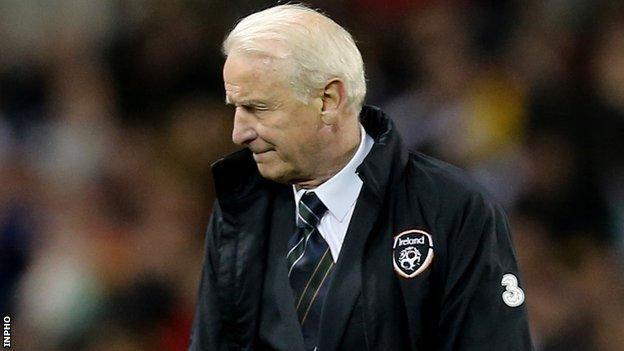 Giovanni Trapattoni has insisted that Tuesday's World Cup qualifier in the Faroe Islands will not be his last game in charge of the Republic of Ireland.

The veteran Italian goes into the match in Torshavn amid specuation that he could be relieved of his duties irrespective of Tuesday's result.

This follows Friday's 6-1 hammering by Germany in Dublin.

However, when asked whether the Faroes game would be his last in charge Trapattoni replied: "Absolutely not."

He added: "I ask you why? We have started the qualifying campaign and we have lost one game to Germany. There is no reason."

Asked further if he still believed he had the support of the Football Association of Ireland, Trapattoni added: "When they are sure, they have to decide, not me.

"I have crossed the Alps barefoot and I have overcome many difficult situations in my career.

"Every manager has moments when he loses. After the Euros, we have lost only one game to Germany, the second team in the world. It's no problem."

Trapattoni said that he has had no contact with Football Association of Ireland chief executive John Delaney since Friday's Aviva Stadium humiliation.

However, FAI officials have not responded to a number of media reports suggesting that Trapattoni's tenure is set to end.

The situation is complicated by the fact that a severance package for the 73-year-old, who is under contract for the remainder of this campaign, could cost as much as £1.6m.

For his part, Trapattoni again strongly defended his Republic record in a tense media conference in Torshavn on Monday evening.

"I can ask you all, why change immediately your opinion? We lost one game against Germany, and we were missing six players from the Euros.

"Why I have to discuss it, I don't know. My job is to overcome the criticism. Every 90 minutes is 90 minutes.

"I accept the criticism. We played badly and they (Germany) were very, very superior."

Full-back Kelly was said to be unhappy at being left out of the starting line-up for the Germany game.

Kelly has travelled to the Faroes even though again he has been left on the bench.