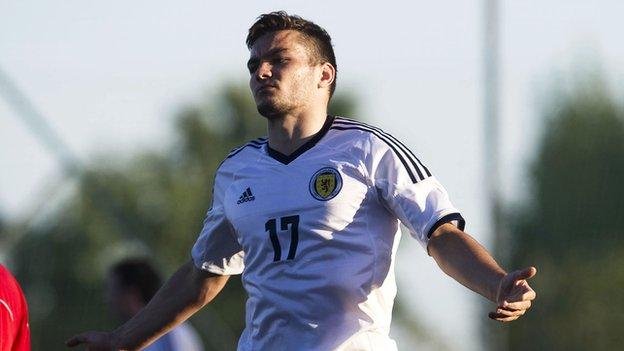 Billy Stark's side had lost 2-0 to the United States on Friday but they bounced back against the Canadians with Armstrong, who was captaining the side for the first time, scoring after seven minutes.

Celtic youngster Watt clinched the win in the final minute as the Scots rounded off their Spanish training camp in style.

Stark was forced to reshuffle after Aberdeen defender Ryan Jack suffered a fracture in his right foot against the USA. Blackpool goalkeeper Chris Kettings and Hearts pair, Kevin McHattie and Dale Carrick, were handed their first Scotland Under-21 starts.

The young Scots started brightly and were soon ahead. David Smith and Dylan McGeouch both had efforts at goal saved by Canada keeper Richard Gomes before Dundee United midfielder Armstrong drilled the ball into the corner of the net.

Canada could have equalised five minutes later when winger Alessandro Riggi fired a low cross into the Scotland penalty area from the right but the ball found no takers.

Scotland almost doubled their lead after 22 minutes, Smith found McGeouch with a clever switch of play but the Celtic midfielder's shot was well blocked by Gomes.

Set-pieces had been Scotland's undoing against the USA and they almost suffered again when Canada defender Doneil Henry rose highest from a free-kick but he sent his header past the post.

On the hour mark the Canadians missed a golden opportunity to draw level when Riggi's pass found Keven Aleman with plenty of time and space inside the penalty area but the striker's weak effort was easily collected by Kettings.

Scotland looked stronger in the closing stages and had a penalty claim when Jason Holt appeared to be dragged to the ground inside the box but referee Valle Carmona waved play on.

In the 77th minute Watt, who had replaced Carrick just after the hour mark, took a pass from Smith at the edge of the box but although the Celtic striker connected well with his shot, the ball sped straight to Gomes.

With 10 minutes remaining Watt was involved again when he teed up Armstrong but the Dundee United player missed the target with his drive.

Smith and substitute Kenny McLean, on for Fraser Fyvie, both missed the target with efforts before they combined in the 90th minute to set up Watt to seal the win.