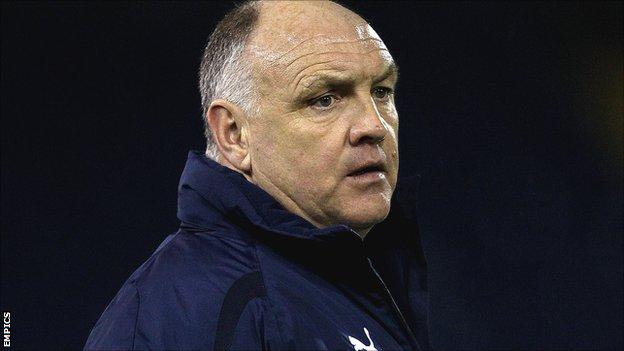 Burnley have confirmed that Terry Pashley has taken on the role of caretaker manager following the departure of Eddie Howe to Bournemouth.

The 55-year-old, who began his playing career with the Clarets, is youth-team coach at Turf Moor and led Burnley to an FA Youth Cup semi-final last season.

He will take charge of their next game at home to Blackpool on Saturday.

to return to the south coast,

We have got to look to get three points against Blackpool. That's the one thing we are concentrating on

"We have all got a job to do," Pashley told the club website.

"We have got to look to get three points against Blackpool. That's the one thing we are concentrating on.

Clarets chief executive Lee Hoos told the that he will not put a timescale on when a new boss will be appointed, although he has outlined what sort of manager the club are looking for.

"I don't think age has anything to do with it," said Hoos. "I think it's about quality and football philosophy.

We are not going to say we have to have someone in by the Blackpool game, or by the Bristol City game

"We have assembled a squad that plays football and is designed to play football in a particular way and we need to kick on with that.

"Of course we were all disappointed to see Eddie go, but we have to use this as an opportunity to try to get back going again and I think there are a lot of good managerial candidates out there.

"We have to use this to as much advantage as we possibly can and make sure we get the right guy in.

"It's more important to get the right person than have an artificial date. We are not going to say we have to have someone in by the Blackpool game, or by the Bristol City game [on 23 October].

"It's much more important that we get the right person for the job."

Portsmouth's Michael Appleton is one of a number of managers linked with the position, although he told BBC Radio Solent that his role at Fratton Park is "tough enough", without having time to think about