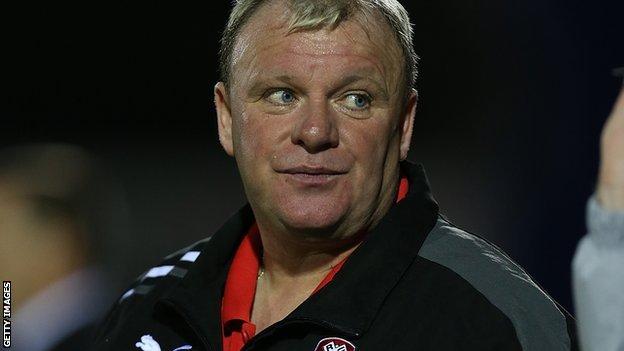 Rotherham chairman Tony Stewart says he is happy with manager Steve Evans despite admitting to being disappointed by the club's early season form.

The Millers currently sit in 13th in League Two after winning just one of their last five games.

"It would be fair to say I am disappointed because we have everything in place," he told BBC Radio Sheffield.

"I thought it was a coup when we brought Steve Evans in and I still feel he is the right man."

He added: "I believe that Steve and his team of people are the right group to get this club promoted.

"Steve has a lot of experience and we speak regularly. He is passionate about delivering what we all want for this club."

Evans will return to the dugout for Saturday's trip to struggling Aldershot after serving a six-match stadium ban given to him by the Football Association for using abusive and insulting words and behaviour with a reference to gender while in charge at Crawley.

The Millers, who moved into their New York Stadium home over the summer, were one of the favourites for promotion at the start of the season.

Stewart believes the club have the players to move up the table.

"I can say on record that the team we have on the pitch at the moment is the best that we've ever had," he continued.

"I think the fans will share my disappointment at the moment but if we put a string of runs together then it will be a very different picture.

"There's a lot to be done and I think it's about us demonstrating the ability that we have."