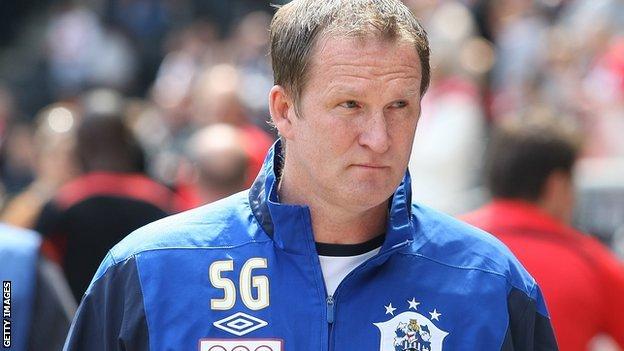 Huddersfield Town boss Simon Grayson does not envisage any two teams running away with the automatic promotion places in the Championship.

"Everyone is capable of beating any other side on a particular day," he told BBC Radio Leeds.

"I don't think anyone could pick out the two teams that they'd say were favourites for the division."

He added: "I think a lot of teams will be competing until February time believing they have a good chance of getting promotion.

"It's a really tough division because everyone is striving to get to the Premier League."

The Terriers have made a strong start to their return to the second tier and currently sit in sixth place with 17 points from their 10 games.

Meanwhile, Grayson has been pleased with the impact that loan signing Jermaine Beckford has had since joining the club on 28 September.

Beckford, 28, who is on a three-month loan deal from Leicester City, has scored one goal in two appearances for the Terriers.

"He'd had a mixed time at Leicester and when he walked through the door people have a certain perception of him but you couldn't meet a nicer lad," he continued.

"He's enjoying his football, he's coming into training with a smile on his face and he's scoring goals.

"We're delighted he's come to us and hopefully he'll continue to do well with us and Leicester will carry on doing well so we can keep him a little longer."