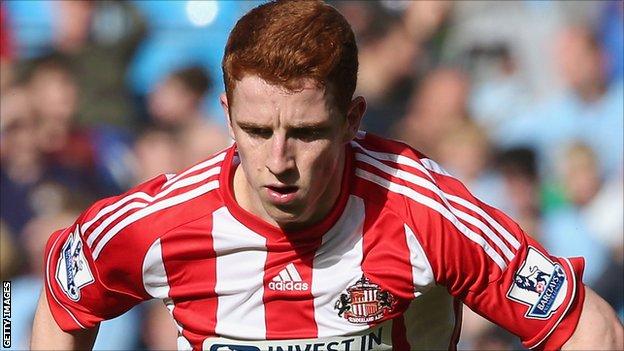 Jack Colback believes the growth of Sunderland and Newcastle United as Premier League regulars has intensified the rivalry between the clubs.

The Tyne-Wear derby has been a fixture in the top flight for five of the last seven seasons, with both sides pushing for Europe as Newcastle did in 2011-12.

"We're both looking to finish in the top 10," Colback told BBC Newcastle.

"It's not just rivals in the sense we're 15 miles apart, we're competing for the same positions in the league."

Newcastle have had the upper hand in the last 10 derbies, winning five, while Sunderland's last victory came at the Stadium of Light in October 2008.

Last term the Wearsiders were beaten 1-0 on home soil and were denied a win by a late equaliser from Shola Ameobi after Nicklas Bendtner's first-half opener put them ahead at St James' Park.

From Tyne to Wear

He came through the Wearsiders' academy ranks, captaining his team to the FA Youth Cup semi-finals before eventual winners Manchester City ended their trophy hopes in 2008

His league debut came on loan at Ipswich Town under former boss Roy Keane, while he was sent off on his Sunderland debut as a substitute against Wolves in May 2010

Colback has gone on to make 62 appearances for Sunderland, scoring once

"We probably outclassed them in both the games last year but only came away with a point which was massively disappointing," Colback added.

"But we go in at home, we'll have the fans behind us and that can give us an extra lift.

"From what I remember growing up, Sunderland have played well but not got the rub of the green, we'd rather have a shocker of a game and win. Defeat just isn't an option."

One boost for Colback and his team-mates is the proximity of the visiting contingent to the pitch, following the decision to move the away section to the top tier of the north stand from behind the goal at the opposite end.

"It was a really good idea to move the fans, it means the Sunderland fans fill the stands all around the stadium," he continued.

"You can certainly hear the difference with the atmosphere, a lot of the time when you had the big back row with away fans you could hear them and it maybe gave their team a lift.

"Now they're at the top tier you don't hear them as much and I'm the Sunderland fans will make sure they aren't heard."