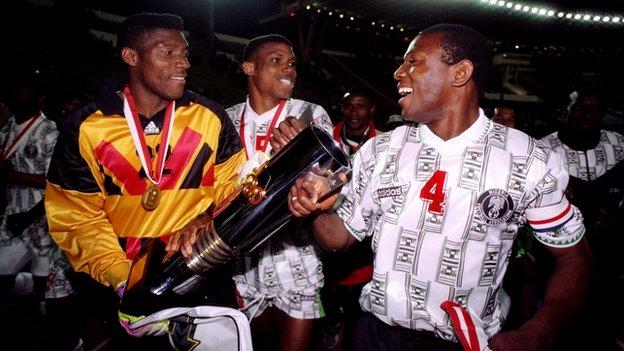 Former Nigeria goalkeeper Peter Rufai has been released from hospital after doctors established he suffered nothing serious after falling ill on Monday.

The 49-year-old, who played for Nigeria at the 1994 and 1998 World Cup, was taken to Toki hospital in Lagos after he briefly fell into a coma.

Rufai spent a day in hospital but has now been allowed to leave.

"He has been discharged from hospital and is resting at home now," his brother Bruce told BBC Sport.

"They carried out several tests and there was no cause for alarm because he made significant progress. We thank Nigerians for their prayers and support as well as the country's football officials."

Rufai appears to have suffered terrible stress after the shock of losing his mother, Christiana Rufai, who died last week aged 78.

He was Nigeria's first-choice goalkeeper when they won the 1994 Africa Cup of Nations in Tunisia and was also in goal when they contested their maiden World Cup later that year.

Since he quit active football, he has worked with the country's Olympic side and has been running his football academy in the city of Lagos.

The Nigeria Football Federation (NFF) wished him a "speedy recovery", adding they had been informed he had been in hospital by a family friend.

A statement from NFF general secretary Musa Amadu was issued on Wednesday, saying: "We wish to, on behalf of the entire Nigeria football family, wish Peter a very quick recovery so that he can get back on his feet and return to a normal life."

"We are very concerned about Peter's situation. He did so much for our dear country as a player and remains one of the true legends of the Nigeria game. He is also the coordinator of our U-23 national team."

After Rufai was rushed to hospital on Monday evening, his brother described what had happened, saying the former footballer had suddenly slumped before his breathing became "very laboured".

"It was wrenching and scary when he slumped and suddenly went into a coma," Bruce told BBC Sport. "It all happened very fast, we just saw a physically and mentally fit man crumble to the ground."

"Doctors failed to diagnose anything and we have a strong feeling it stems from a family bereavement. He appears to have suffered a terrible stress from the shock of losing our mum."