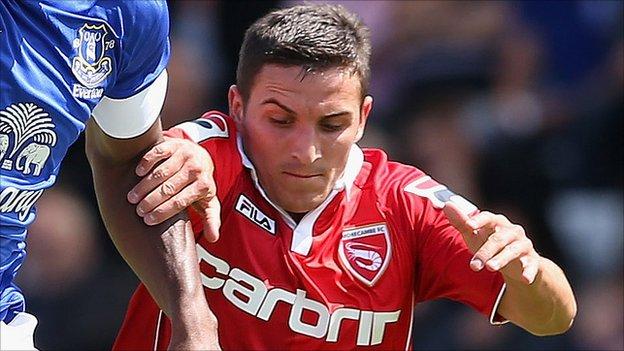 Jack Redshaw believes he can establish himself in Morecambe's starting line-up after a good start to the campaign.

The striker, 21, took his tally for the season to five with both goals in the against Rochdale, his former club, at Spotland on Saturday.

"I've been scoring a few goals in the last few weeks and I'm happy with my form," he told BBC Radio Lancashire.

"You gain experience with every game you play, so hopefully I can play a lot more games and gain more confidence."

Redshaw, who has made just five league starts this season, is now Morecambe's top scorer so far.

Redshaw back to haunt Dale

Saturday's victory was particularly sweet for Redshaw, having been released by Dale at the start of 2011.

And Jim Bentley was pleased to see the youngster score a "typical striker's goal" - which is something of a rarity, according to the Morecambe boss.

"We don't seem to get many tap-ins," said Bentley. "We don't gamble enough in the box and get across people.

"Jack scored a typical striker's goal because he was in the right place at the right time. He scored two fantastic goals and I'm pleased for him, going back to his old club.

"I said to the lads before the game that they should try to win it for Jack because it's his old club and it's always to go back and show them what they're missing. He certainly did that."