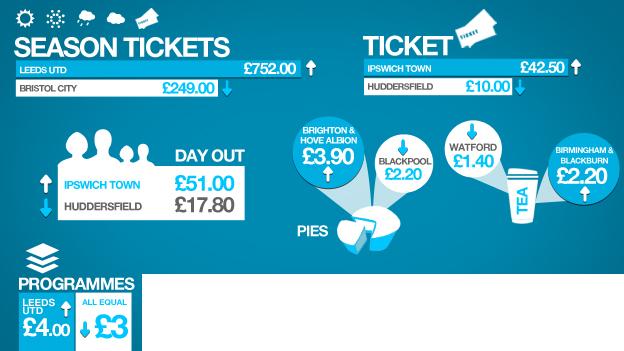 Huddersfield is the cheapest place to watch Championship football, according to BBC Sport Price of Football.

The lowest-priced adult ticket is £10, with the cost of a programme, cup of tea and pie adding another £7.80 to a visit to the John Smith's Stadium.

Only Sheffield United provide a cheaper matchday experience in the entire Football League.

A day out at Bramall Lane costs £17.20, 60p cheaper than Huddersfield.

"We want to have flexibility in our prices and this season we have formalised that offer and made a commitment in our pricing structure via the 'PROMO' category," Huddersfield chief executive Nigel Clibbens said.

Crystal Palace's cheapest ticket is priced at £20 for all but three top-category games. But Palace co-chairman Stephen Browett said that the cheapest tickets at some other clubs were available for a fewer number of selected matches, making matches at Selhurst Park more consistently affordable for fans.

"We charge £20 for adults in one of our stands and also in a section of another and I honestly believe that at Palace we make a massive effort to give our supporters some great deals," added Browett.

Championship leaders Cardiff City and Derby made history in June when they became the first football clubs in the UK to launch dynamic-pricing across a stadium.

Prices for games at the Cardiff City Stadium and Pride Park fluctuate during the course of the season based on real-time conditions, such as team performance, rivalries, matchday and time and league position to encourage fans to purchase as early as possible in order to get the best prices.

Brighton have the most expensive pies in the second tier, with a homemade chicken and ham effort at the Amex costing fans £3.90. At the other end of the scale, Blackpool's pies come in at £2.20.

Huddersfield and Sheffield United are the only clubs out of all 92 in the English leagues who offer a day out for less than £20. Last year it was 12 clubs.

A programme in the Championship will cost £3 or £3.50 everywhere this season except for Elland Road - where Leeds United's matchday publication will set you back £4.

Fans at Watford's Vicarage Road stadium can bag the cheapest cup of tea in the division, at £1.40, while Birmingham and Blackburn charge £2.20 for a brew - the highest.

Meanwhile, Ipswich is the most expensive place to watch football in the Championship.