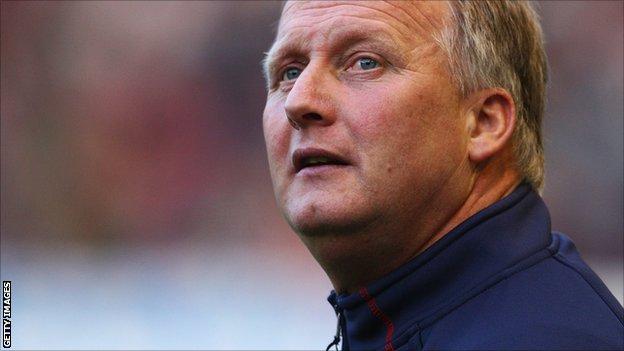 Kevin Blackwell insists Bury are good enough to remain in League One, despite conceding a late equaliser to

The Shakers looked on course for their first league win of the season with a goal from only to concede in stoppage time.

"We've shown everybody we can compete in this division," said Blackwell.

"That was one of the things we needed to get through to the players as quickly as possible."

The Bury boss added: "We're good enough to be in this division and now we want to stay there."

Bury have drawn two and lost two of the four league matches they have played under Blackwell, while the club progressed to the last 16 of the Johnstone's Paint Trophy with a penalty shoot-out victory against Rochdale.

And the 53-year-old says there have been positive signs from his team, particularly in Tuesday's game at Gigg Lane.

"The lads were fantastic from start to finish," Blackwell told BBC Radio Manchester. "We missed opportunities to kill the game off, but other than that, I thought it was a very good performance.

"It's always heartbreaking to concede as late as that, particularly when the performance was as good as it was. I think that was the only shot that Carlisle had on target all game."