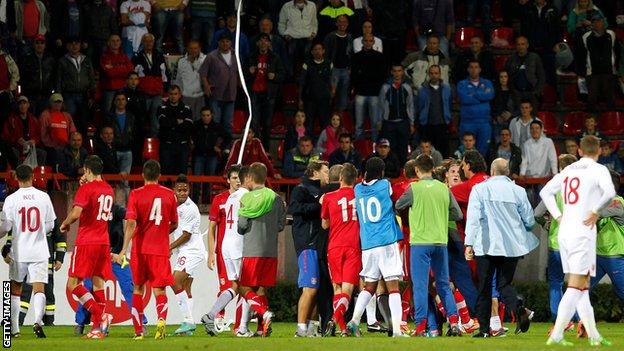 England U21 captain Jordan Henderson says players were racially abused and attacked by missile-throwing Serbian fans after qualifying for Euro 2013.

Fans ran on to the pitch and scuffles broke out after England won 1-0 in Krusevac to progress 2-0 on aggregate.

The Football Association has reported "a number" of racist incidents to European governing body Uefa.

"There was a lot of racist abuse out there from the stands and a lot going on after the game," Henderson said.

"There were also stones, coins and seats getting thrown at us," he added. "What happened wasn't nice and is not called for in football."

"As soon as the players were in the tunnel apparently there were issues. The Serbian conditioning coach was apparently jostling and getting his face in England players' faces. Jack Butland, the England goalkeeper, was peppered throughout the game with various objects thrown from the stands. Stuart Pearce had a seat thrown at him. Then at the end Danny Rose was racially abused."

England defender Danny Rose, sent off after the final whistle in Serbia after kicking a football into the crowd, seemed to indicate he had been racially abused.

"I didn't understand why Danny Rose was sent off at the end," said Henderson. "I didn't see he did anything wrong, other than get abused."

The FA said in a statement it "condemns both the scenes of racism and the confrontation at the final whistle during which time our players and staff were under extreme provocation".

It added: "The FA has reported a number of incidents of racism to Uefa following the fixture. These were seemingly aimed at a number of England black players by the crowd. The matter is now with Uefa."

England assistant coach Steve Wigley was manhandled by opposition players and staff after the game.

"One or two of the technical staff from the opposition, and I don't include their manager in that, didn't cover themselves in glory on the pitch at the end," England manager Stuart Pearce told BBC Sport.

"Punches, headbutts were thrown, and God knows what else. We will let the authorities deal with this at Uefa."

In 2007, the Serbian Football Federation was fined £16,000 at the Under-21 European Championship in Netherlands after their supporters racially abused England's Nedum Onouha.

"It's disgraceful to see these scenes," said the former Liverpool and Manchester United midfielder, whose son, Tom, played in the game for England.

"If it was me, they [Serbia] would be kicked out for the next five tournaments - European, World Cups - but they will get a little ban and that will be it. Things like that are not what we want to see in football. It takes it back to the dark ages."

Ince admitted he had been concerned about the safety of his 20-year-old son, who plays for Blackpool.

"When your son's out there, it's worrying," Ince told ESPN.

Clarke Carlisle, an ambassador for anti-racism campaigners Kick It Out, said: "It's so disappointing to see things like this going on, the racial element and the pure physical violence, kicks and punches being thrown.

"These guys are supposed to be international players and conduct themselves accordingly."

Reading striker Jason Roberts took to Twitter to back Rose, who is on loan at Sunderland from Tottenham Hotspur.

In another message, Roberts added: "We demand to be treated with respect. We are not asking. NOW, not tomorrow. I am fuming."