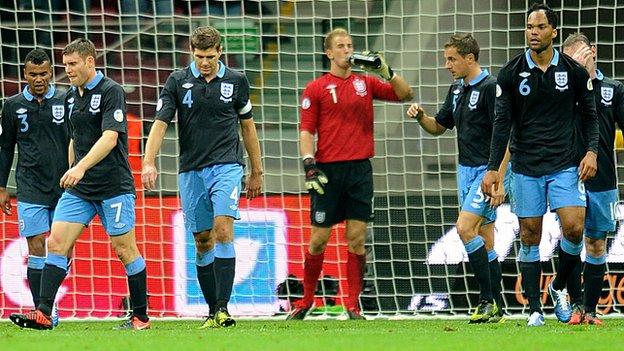 England were denied a crucial victory as Kamil Glik's second-half equaliser gave Poland a point they fully deserved in the delayed World Cup qualifier in Warsaw.

Roy Hodgson's side were on course for three points that would have been a generous reward for a mediocre display after Wayne Rooney's deflected header gave them the lead before the interval.

In a game played 24 hours after the initial meeting was washed away in a Warsaw deluge, England struggled to exert any supremacy and it was no surprise when Glik took advantage of a rare misjudgement from keeper Joe Hart to head home a corner with 19 minutes left.

England would have been hoping for a win that could have given them control of a potentially very tight qualifying group, but in the end there may even be a measure of relief that they leave Poland with a draw which leaves them a point clear at the top of Group H.

Moments of quality were rare, not helped by a patchy pitch made worse by the storm that hit the city on Tuesday and forced the game to be held over for a day.

England's campaign now has a mixed appearance, with convincing wins against Moldova and San Marino set against two draws, from meetings with Ukraine and now Poland.

Hodgson's men will resume action with a double header against San Marino and Montenegro in March, the latter fixture in particular now assuming real significance.

The England boss made no late alterations to the team selected for the postponed game - but the lingering effects of the Warsaw rains were seen in the sticky surface, which curtailed Poland's counter-attacking style and emphasised how tentative England's passing was.

Rooney's industry was evident when he raced deep into his own territory to cover when Ashley Cole lost the ball but he was as guilty as any England player of gifting the ball back to Poland in an undistinguished first half.

Hart needed to be alert to dive at the feet of Lukasz Piszczek and Kamil Grosicki shot wide as Poland attempted to build momentum, while the dangerous Robert Lewandowski fired across the face of goal after shrugging off Tom Cleverley.

But it was Rooney whose contribution made the difference at half-time as he gave England a 31st minute lead, his header from Steven Gerrard's corner glancing off Piszczek and beyond goalkeeper Przemyslaw Tyton.

Poland had certainly seen enough to offer encouragement and the momentum was with the hosts after the interval, with Glen Johnson having to rescue Phil Jagielka when his mistake threatened to offer up an opportunity to Lewandowski.

Hart had been relatively untroubled but he was called into action to turn away Ludovic Obraniak's long-range effort.

England were desperately wasteful in possession and were fortunate that Poland had not mustered the quality to punish them for their failings, although they had a chance to extend their lead against the run of play in the 64th minute.

Gerrard's free-kick found Jermain Defoe unmarked at the far post but his finish was uncharacteristically wasteful as he screwed his shot back across the face of goal.

It was Defoe's final contribution as he was soon replaced by Danny Welbeck and the change almost brought an instant reward.

The substitute won a race for possession with Polish keeper Tyton but, when he pulled the ball back to Manchester United team-mate Rooney, his finish was hopelessly off target.

Poland's pressure merited an equaliser and it came with 19 minutes left. It was a goal that will not have pleased Hart, who got nowhere near Obraniak's corner as Glik powered home the header.

It was the signal for another England change as Hodgson removed Rooney, who had been poor apart from his goal, and replaced him with the pace of teenager Alex Oxlade-Chamberlain.

The game's closing stages offered moments for each side but ultimately both seemed satisfied with sharing the points.