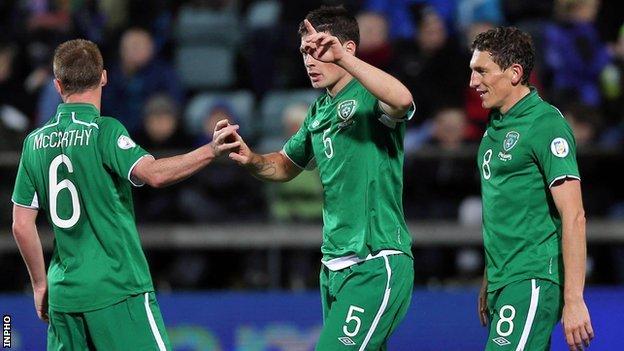 Giovanni Trapattoni feels the Republic of Ireland's World Cup qualifying campaign is back on track after seeing his side beat the Faroe Islands 4-1.

The Italian had gone into the match amid speculation that he could be sacked irrespective of the result after Friday's 6-1 hammering by Germany.

"Germany are the strongest team in the group but we are in a good position in the table," insisted Trapattoni.

"It was an important result and the team deserved to win."

After three games, the Republic sit third in Group C with six points, four points behind leaders Germany but with a game in hand, and a point behind Sweden.

And after witnessing a spirited performance and a comfortable victory for his side at the Torsvollur Stadium, Trapattoni refused to contemplate his exit.

Asked if he expected to be manager for the rest of the 2014 World Cup qualifying campaign, the 73-year-old said: "We have in November another game.

"I expect [to remain in charge]. We started three games ago - we have won two games, we have lost one against the best team.

"I know what I can do, but it's not my decision. I don't have a problem.

"For me, it's my job. I say always I am proud to be the manager of this team with these players.

"We have discovered many, many young players in the last three years and sometimes we can lose. Football is like this."

Trapattoni received the full backing of team captain Robbie Keane after the match.

"Our target was always to finish second in the group and we are still on course to do that.

"Once we got the first goal, we knew the gates would open."