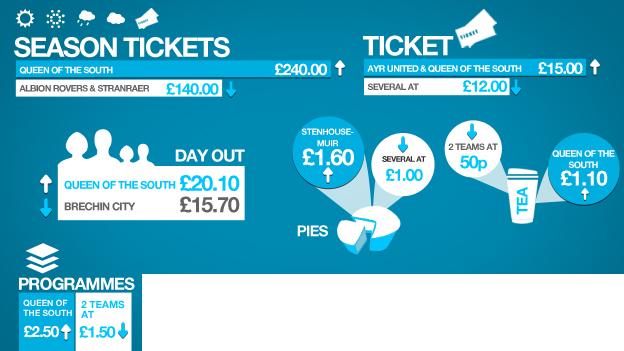 Forfar Athletic are the lowest-priced club to watch Scottish Second Division football at, according to BBC Sport's Price of Football.

The club's cheapest day out, including one adult match-day ticket, programme, pie and cup of tea, costs £15.10.

If fans want to upgrade to the best seats at Station Park, it costs only £1 more.

Only 14 miles away is the second lowest price, with the cheapest day out at Brechin City costing £15.70.

However, Brechin also have the least expensive cup of tea in the whole of English and Scottish professional football, with a tea costing 50p.

Angus Fairley, secretary of Brechin City, said: "It's very difficult to compete in this division. A lot of clubs are in the same boat and are trying to keep afloat with the fans they have coming through the gates each week.

"The minimum we can charge for tickets is £12 and the way we look at setting those prices is we look at our closest rivals, not just in terms of in the league but the geography of the area as well, to see what they charge and how it compares with the rest of the league before making any other decisions on amenities.

"But we do think we're really competitive in comparison to other clubs and offer good value for money."

Current divisional leaders Queen of the South are the most expensive club in the league for a day out including the cheapest category of ticket.

The Dumfries club charge £20.10 at Palmerston Park for one adult matchday ticket, programme, pie and cup of tea - £5 more than Forfar.

In comparison, the lowest priced day out at Scottish Premier League club Inverness Caledonian Thistle is only 40p more at £20.50.

The next highest-priced day out in the Scottish Second Division behind Queen of the South is Ayr United at £19.50, while at East Fife it costs £17.30.

Queen of the South also have most expensive season tickets, charging £230 for their cheapest adult ticket, while Ayr United charge £205.