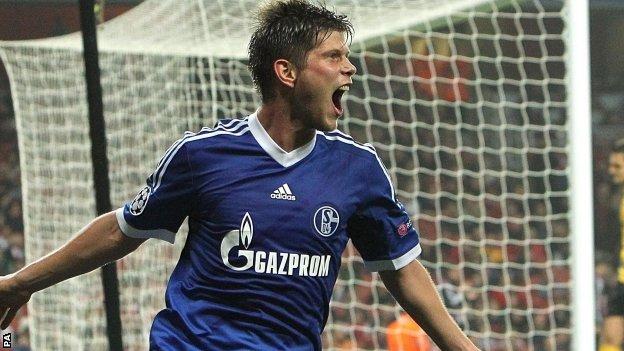 Arsenal's limitations were exposed by an impressive Schalke 04 as they slumped to Champions League defeat at Emirates Stadium.

The Bundesliga side took control of Group B as goals in the final 15 minutes from Klaas Jan-Huntelaar and Ibrahim Afellay gave the Germans a victory their superiority fully deserved.

With Arsene Wenger in the directors' box serving the final game of a three-match touchline ban and assistant Steve Bould in charge on the touchline, Arsenal never made any serious impression on a night of sheer frustration.

And once Schalke worked out Brazilian left-back Andre Santos was the glaring weak link in the Arsenal line-up, they probed ruthlessly and to great effect to end the Gunners' 100% record in the competition.

Arsenal will still feel confident of qualification for the knockout phase after victories over Montpellier and Olympiakos - but Schalke are now in pole position to take top spot in the group and potentially earn an easier draw in the last 16.

It was a tough night for Arsenal and Wenger as Schalke showed a potency in attack that was way beyond anything the hosts could offer, a fact reflected in the loud jeers that rang around the ground at the final whistle.

Gervinho was entrusted with the attacking responsibilities with Olivier Giroud left on the bench, but he struggled throughout and was eventually put out of his misery with a substitution.

Arsenal survived a scare after 20 minutes when Afellay, on loan from Barcelona, went down in the area under a challenge from goalkeeper Vito Mannone after a slight hesitation from Carl Jenkinson - but referee Jonas Eriksson ruled that the winger had dived and he was punished with a yellow card.

Opportunities were at a premium and when Gervinho did break away he was isolated and crowded out by Schalke defenders as he attempted to work his way into the box.

Schalke were targeting the wayward positioning of Santos but were running into a formidable barrier in the shape of Germany defender Per Mertesacker, whose performance was exemplified by a brave block from a Jefferson Farfan shot.

Santos was nowhere to be seen as Atsuto Uchida broke into the area and Arsenal were fortunate the normally lethal Huntelaar was wayward with his finish at the near post.

And in another break into the same left-flank territory just after the break, Benedikt Howedes should have done better than fire over the top from Farfan's cross.

22: Arsenal have hit fewer shots than any other team in this season's Champions League

Gervinho was feeling the frustration of Arsenal's fans but he almost created the opener with a direct run and cross - but no colleagues were waiting to apply the final touch as the ball flashed across goal.

There was to be no further opportunity for Gervinho to redeem himself as he was replaced by Giroud in an attempt to inject impetus into the hosts' attack.

Schalke had been the more threatening team throughout and it was no surprise when they took the lead with 14 minutes left. Santos was once again culpable, playing Huntelaar on side as he chased Afellay and this time the Netherlands striker made no mistake.

Afellay completed the job with four minutes left, converting the simplest of chances after Farfan had once again embarrassed the labouring Santos.