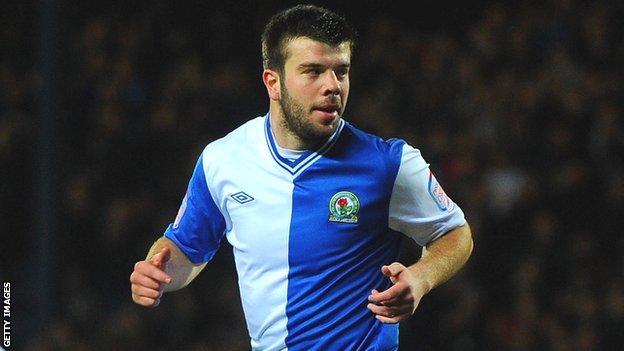 Scotland defender Hanley, who replaced Morten Gamst Pedersen in the line-up, pounced on David Dunn's cutback to finish from close range for Rovers.

Lewis Buxton went closest for Wednesday with a solo effort.

The full-back weaved his way forward and finished with a fierce shot that whistled inches past the far post.

The Owls created other chances, with Gary Madine heading over from Paul Corry's corner while Michail Antonio shot wastefully wide.

At the other end, Llera's countryman Ruben Rochina forced keeper Chris Kirkland, playing his first game since he was attacked by a Leeds fan last Friday, into a sharp save with a stinging 30-yard shot.

Kirkland stopped Rochina again when he saved the Spaniard's deflected shot with his feet.

Llera was then called into action when he cleared substitute Pedersen's free-kick off the goalline.

The defeat leaves Wednesday - winless in the league since August - second bottom of the Championship.

Blackburn caretaker manager Eric Black on the search for a new manager:

"I don't know, I've no idea, I'm just focusing on - I know it sounds boring and repetitive, but tomorrow morning we have to start preparing the players again.

"Saturday's game at Watford's my only target and that's all I'm looking at."

"Take away the first 10 minutes of the game and I think we've absolutely slaughtered them. But it's that final third, that final delivery, that final little pass that's letting us down.

"We've come here to a team that's just come out of the Premier League and, unless I'm watching a completely different game I thought we absolutely pulverised them for 80-odd minutes."