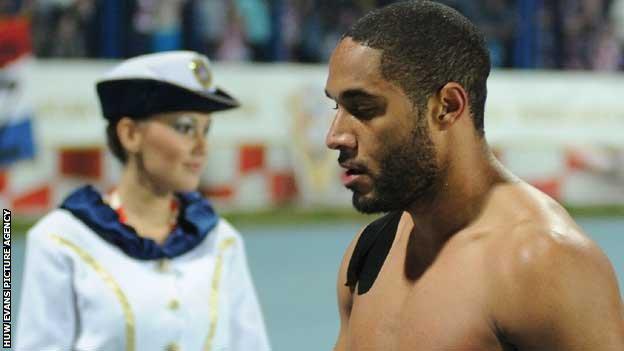 "The conditions played a part in the back pass; the pitch was ridiculously bad," said Swansea defender Williams.

"But I probably should have hooked it out, knowing what it was like."

Wales boss Chris Coleman offered his after his first-half error, and a frustrated Williams admitted: "How many times do you pass the ball back to the goalkeeper and it is fine?

"It got stuck in the mud a little bit and it went in after that."

Coleman revealed the Wales management had pre-match concerns about the state of the Gradski Stadium pitch.

"When we checked it [the pitch] out, it was very heavy at one end," said Coleman.

"It was the same for both teams, don't get me wrong, but we were very lucky it didn't rain.

"We were worried that if it rained, the game could have been in doubt because the pitch was so heavy.

"The end we defended in the first half - the end where we made the mistake - was really difficult.

"It was forecast rain and had that come then the game could have been in trouble. It played alright in the end, yet the pitch never phased Croatia."

England's World Cup qualifier with Poland in Warsaw on Tuesday was but Wales' Group A match survived as Coleman's men lost the third game of their first four qualifiers.

Eduardo Da Silva's close-range strike in the second half doubled the lead to ensure unbeaten Croatia remain joint top of Group A with Belgium on 10 points, while only Scotland are below Wales, who have just three points.

"We make one mistake at the moment defensively and we get punished," said Coleman. "You don't expect that from an experienced player like Ashley, who is a quality defender.

"We know that end of the pitch is difficult and obviously Pricey comes out, kicks it and it rebounds off the striker.

"We have to cut that out to give ourselves a chance. As hard as we fought, we have to cut out individual errors like that."

Coleman, who has lost five of his opening six games in charge, remains defiant about Wales's hopes of qualifying for Brazil 2014.

"We have six games left and everybody is going to be taking points off each other, especially at home," he said. "So you never say never."