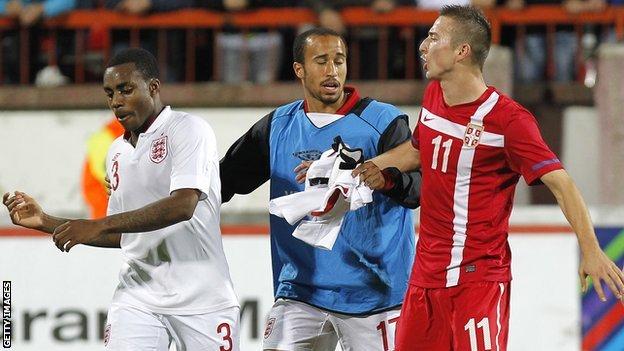 England Under-21 defender Danny Rose called for Serbia to be banned after claiming he was racially abused by fans in Krusevac.

Fans ran on to the pitch and scuffles broke out as England celebrated a and Euro 2013 qualification.

Rose, 22, said he was subjected to monkey chants throughout the game, starting in the warm-up.

He told Sky Sports: "I had two stones hit me in the head when I went for a throw-in."

Connor Wickham's 94th-minute goal secured a 2-0 aggregate victory in the second leg of the qualifying play-off.

Sunderland's Rose was sent off after the final whistle for kicking the ball away in reaction to the abuse he was receiving.

Rose described how the chanting started in the warm-up and gradually got worse as the match went on.

"After 60 minutes my mind wasn't really on the game. I was just so angry and it was so hard to concentrate," he said.

"Then we scored and after 90 minutes' worth of abuse, I expressed my emotions as soon as we scored.

"Next thing I know, all the Serbia players were surrounding me, pushing me. I remember getting slapped twice. I got ushered away and that's when I kicked the ball - and then the referee sent me off.

"I don't understand - the game had finished. And then there was more monkey chanting. They should be banned."

The Football Association reported "a number" of racist incidents to Uefa.

England defender Nedum Onuoha was racially abused during the 2007 Under-21 European Championship game against Serbia in the Netherlands, for which Serbia were fined £16,000 by Uefa.

Professional Footballers' Association chairman Clarke Carlisle said Serbia should received a "significant" international ban, adding that it was "farcical" that Rose was sent off for reacting to being racially abused.

"Serbia should be banned because it's a repeat offence," he told BBC 5 Radio live.

"Banning them for a start, from any tournament, would be progress but I think if it's significant - if it's a couple of tournaments - then that would cause that nation to address the issue that has deprived them of international competition."

PFA chief executive Gordon Taylor said: "The PFA condemns the appalling racist abuse endured by our Under-21 team in Serbia which evoked memories of scenes we all hoped had been consigned to the past.

"Fifa and Uefa need to get tough and deduct points or disqualify teams from competitions."

Former England midfielder Paul Ince, whose son Tom played in the game, told ESPN: "It's disgraceful to see these scenes.

"If it was me, they [Serbia] would be kicked out for the next five tournaments - European, World Cups - but they will get a little ban and that will be it."

Reading striker Jason Roberts told BBC Radio 5 live: "Uefa have shown they have no stomach for this battle. They haven't taken this on in the past; I doubt they will now.

"It's time for players to take action and that's why I've said they should walk off the pitch because, guaranteed, if that happens things will change."

Roisin Wood, director for anti-racism campaign Kick It Out, said: "Banning has got to be an option.

A Uefa spokesperson told BBC Sport that it expected to receive the referee and delegate's reports on Wednesday or Thursday, but would not comment about the incidents at the game until they had studied the reports.

A spokesperson for the Serbian Football Association told BBC Sport there will be a meeting between its board members on Wednesday followed by statement later in the day.