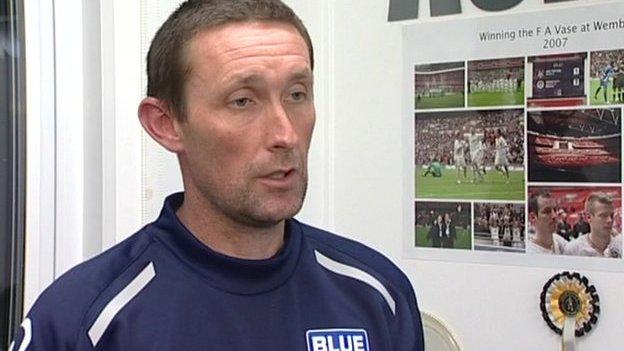 Truro City boss Lee Hodges has praised his squad as the club wait to see if they will be saved from liquidation.

City have to cover the costs of clubs visiting Truro should they go bust.

The club had their first training session for six weeks on Tuesday.

"One or two have been phoning me saying they've been speaking to clubs and I've asked them to give me a couple more days," Hodges told BBC Radio Cornwall.

"That's a testament to what a fantastic bunch they are and if someone was to take it on they've got a great bunch of lads here.

"If not, whoever they go on to play for, they're getting some really good players."

And Hodges says he has been overwhelmed by the gestures of goodwill that the club have seen over the past few weeks as their plight has become more desperate.

Fellow Blue Square Bet South side Eastleigh, who Truro are scheduled to face on Saturday, have offered to donate their gate receipts while fans of Scottish giants Rangers have also donated money.

"When you see these teams doing this for us, on behalf of everyone at Truro City, I want to say thank you very much.

"It's unbelievable scenes to be seeing all this at the moment."

Truro are after owner and left the club to fight

They were initially told they had to pay their bond to the Football Conference by but were given an extra week to find the money.