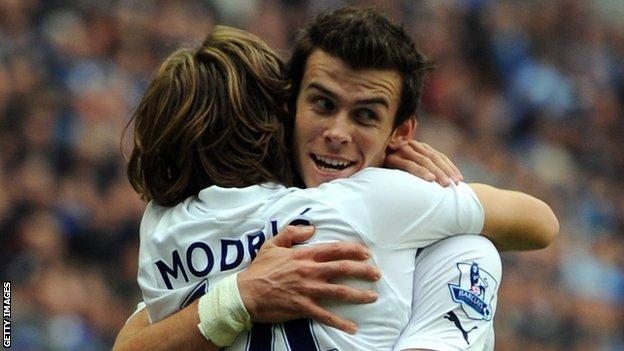 Bale has been instrumental in Spurs's impressive recent form and the Wales winger is regularly linked with a move away from White Hart Lane.

Former Real striker Davor Suker feels a move to the Bernabeu "would be his best move of his career" and current star Modric feels Bale is "good enough".

Modric said: "I agree he should play for Real Madrid and I hope he'll come."

Bale even caught the eye for struggling Wales against Modric's Croatia when the hosts won Tuesday's in Osijek to all but end Welsh hopes of qualifying for Brazil 2014 with just four games gone.

The 23-year-old has been transformed into one of the Premier League's stars since his move from Southampton in 2007 and was catapulted to international prominence with his first hat-trick in Spurs's Champions League defeat at Inter Milan in 2010.

Real, who are coached by Jose Mourinho, are one of the clubs who have been linked with Bale and Spurs entered a partnership with the nine-time European champions in which will the two clubs will work together in respect of players, coaching and commercial relationships.

But Spurs have denied the agreement allows Real Madrid to have first refusal on players such as Bale.

Bale signed a new Tottenham contract until 2015 but that does not end speculation suggesting the Cardiff-born player could leave London for a record transfer fee for a British player.

And Croatian midfielder Modric, who hopes the 2011 PFA Player of the Year joins him in the Spanish capital.

"It would be amazing and I think he can [play for Real Madrid]," Modric told BBC Radio Wales.

Bale has scored six in his last eight Wales games but after inspiring Wales to a with a two-goal display on Friday, he could not ensure a Wales win in Croatia and said he was a "marked man" in Osijek.

"It is normal now I think," said Bale.

"I'm never going to stop doing what I do and hopefully I can continue to play well."

Bale is the only player to score for Chris Coleman's side in 2012 but insists Wales are not a "one man team".

"We defend as a team and attack as a team," said Bale.

"Sometimes I'm up there and if players are there to be taken on then I do, but all the boys deserve credit."