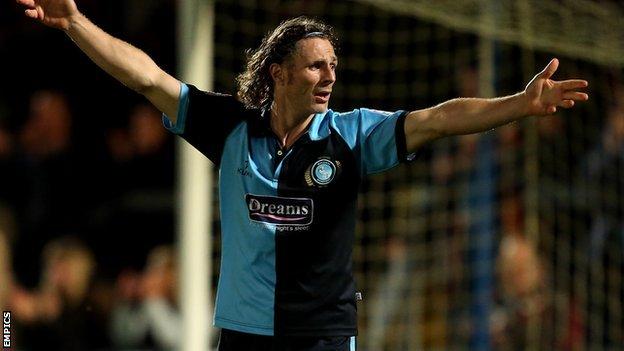 Wycombe caretaker manager Gareth Ainsworth has said his side's performances have strengthened his claim for the permanent job.

Ainsworth has taken seven points from his four League Two games in charge.

"The effort they have given has given me time with the board and fans," he told BBC Three Counties Radio.

"The board will have to make a decision based on what I do in the next few weeks. But I'm chuffed with the way it's gone."

39-year-old Ainsworth has secured league victories against Torquay and Fleetwood, as well as a Johnstone's Paint Trophy win at Portsmouth.

But he says he is unsure when the Wycombe board plan on naming their permanent appointment.

"I was told to take the reins for now. How long is for now?" said Ainsworth, who had two caretaker spells at QPR.

"I'm enjoying it. I'm a proud man. It's hard work, but I've never shied away from that.

"I've made no secrets since my QPR days that I do want to be a manager one day. I believe I've got what it takes to be a good manager.

"What I wanted was some good results to get a bit of time and patience from everyone.

"No way are we the finished article yet or going to win the league or anything."

Ainsworth, who is still playing for the Chairboys, was part of Waddock's coaching team and insists he has not had to make sweeping changes to turn around the club's fortunes.

"I've brought a couple of players in I always fancied and made a few tweaks here and there," he said.

"People know the way I used to play and there's a minimum requirement now of passion and effort.

"If you're not doing that you're going to be out of the team."