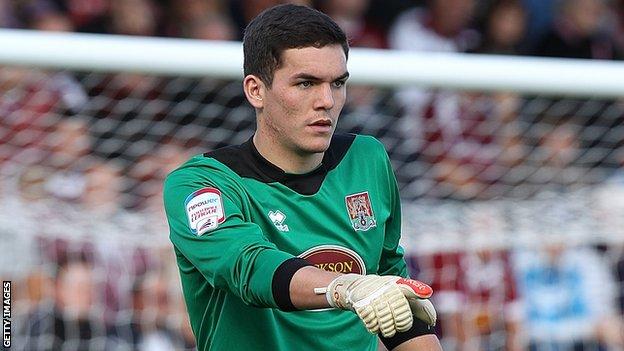 Goalkeeper Nicholls, 20, is set to return to the Latics at the end of October, although the Cobblers are confident of keeping him at Sixfields.

"To have two very good goalkeepers is only good for the team and the squad.

"He's still young but his stature is that of someone a lot older. I think he's going to have a very good future," Charles told BBC Radio Northampton.

"On Saturday [against Exeter] there were two turning points. Lee made a save just before we scored the first goal, and when we were 2-0 up, he made another stop," the defender added.

"That's a sign of a very good goalkeeper - he wasn't really called upon but has made two very good saves."

Nicholls has kept six clean sheets in all competitions since joining Northampton and manager Aidy Boothroyd said they were "well down the road" towards extending his stay.

"We're grateful to all the teams that are loaning us players [but] they know by letting their players come out to us, they're going to get a learning environment where they're going to develop and go back as better players," he added.

"I think the culture and environment and the manager do set the tone. When I was at a higher league club [I would consider] where the boy was going as opposed to the league."