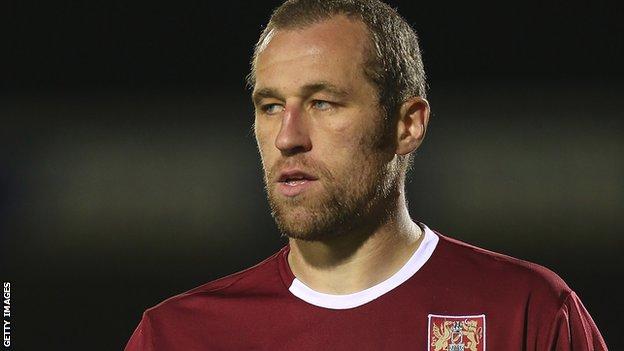 Northampton Town defender David Artell will be out for up to 12 weeks because of an Achilles tendon injury.

The 31-year-old, who joined the club in August and has made 14 starts, has what is described as a "slight tear".

Manager Aidy Boothroyd told BBC Radio Northampton: "If he was to keep on playing, we would have a major problem with him. It's a blow.

"But Anthony Charles did very well when he came into the team and he would've been playing [at Barnet] anyway."

It's very rare a chairman comes to you and says 'do you want any players?'

"We're trying to get them back as fast as possible," said Boothroyd. "Danny East is probably the closest one to fitness.

"The last thing anyone wants to see is injured players moping about the place. They've got to be bright because it's those sort of players that, at the end of the season, make the difference. We've got to keep everyone together."

Boothroyd admits he is still weighing up whether or not to bring in another player to cover the injuries in the squad.

"The chairman has been brilliant. It's very rare a chairman comes to you and says 'do you want any players?'" he said.

"I'll have to give it some serious thought and we may well need to bring an extra defender in.

"Having said that, we've got John Johnson and Danny East coming back and the last thing I want is not enough room in the changing room for the players we've got. We've been down that route before. I still want to keep [the squad] tight."